The Fijiana Drua have claimed their maiden Buildcorp Super W title, defeating reigning champions, the NSW Waratahs 32-26 at AAMI Park as apart of Super Round Melbourne. 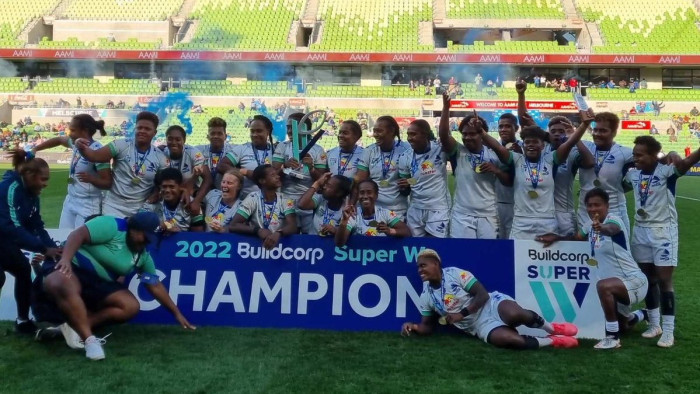 The Fijiana were based in Australia for the duration of the 2022 Buildcorp Super W season, providing much needed match exposure and international competition for Fijian players ahead of the World Cup later this year.

The Drua set the pace for the match with an opening try to Vitalina Naikore before the Waratahs returned serve with Natalie Delamare crossing to level the scores.

Back-to-back tries saw Roela Radiniyavuni and Merewalesi Rokouono extended their lead for the Drua before Delamare again struck for the Waratahs seeing them head into the break down 17-12.

Delamere again remained true to form for the Waratahs crossing for her third try as the second half commenced, with Lori Cramer adding the extras to give the side the lead for the first time in the match.

As the match began to settle a tough back and forth ensued between the two sides with Naikore again finding the line for the Drua. The Waratahs remained in the fight with Eva Karpani powering through the visitors defence to again regain the lead.

However, it would be the Drua who would have the final say with Timaima Ravisa crossing for her first try before Naikore replicated Delamere’s efforts to cross for her third try, securing the sides maiden victory.