France secured a bonus point win in Scotland with all their scores coming in a dominant first half. 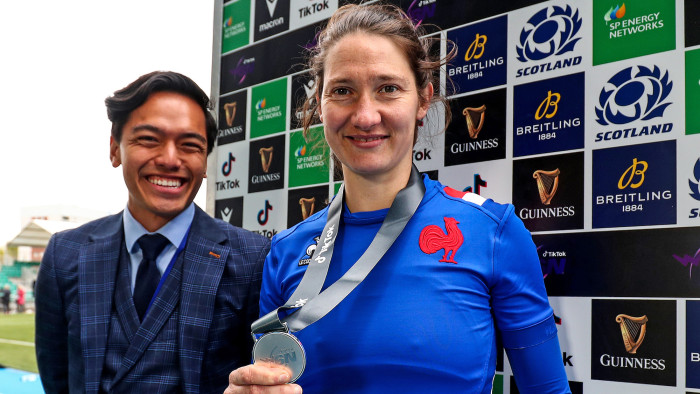 France raced into a 28-3 lead by the break with four well taken tries, but Scotland were much improved after half time and won the second-half 5-0.

The damage had already been done though.

Scotland started well but Jessy Trémoulière punished some wayward kicking with some sublime touches and a couple of perfectly placed 50:22s, putting her side in brilliant positions in the field.

From one kicking exchange, star scrum-half Laure Sansus highlighted her class with a superb chip and collect to race over for the opening try just ten minutes in.

Scotland were rewarded for a period of pressure when Helen Nelson got them on board with a penalty but France's defence stared to dominate, despite Scotland enjoying plenty of possession with Maddassou Fall and Celine Ferer particularly strong.

Trémoulière got a second try on the board with a neat finish a few minutes later and then Sansus added her second score after the brilliant Gaelle Hermet charged down Jenny Maxwell’s kick, with Sansus reacting fastest to dot down in the corner.

Trémoulière's goalkicking was immaculate as she kept hold of her 100% record off the tee with a conversion from the corner.

Another of her perfect 50:22s handed the French a throw deep in the Scotland half and from the lineout and some superb offloading Hermet dived over to hand France the lead of 28-3 at half-time.

Scotland were miles better in the second half and had an immediate chance to score but prop Leah Bartlett could not control the ball and spilled it over the line.

Rachel Malcom and Christine Belisle were promiment in attack while Lana Skeldon adn Evie Gallagher did brilliantly to repel any French efforts. They were rewarded late on when Chloe Rollie went over in the corner but it was too little too late.