This weekend marks the 51st le Crunch, and Lydia Furse - an historian who is working with the World Rugby Museum and De Montfort University for a PhD on the history of women's rugby - takes us back to the first, between France and Great Britain, in 1986. 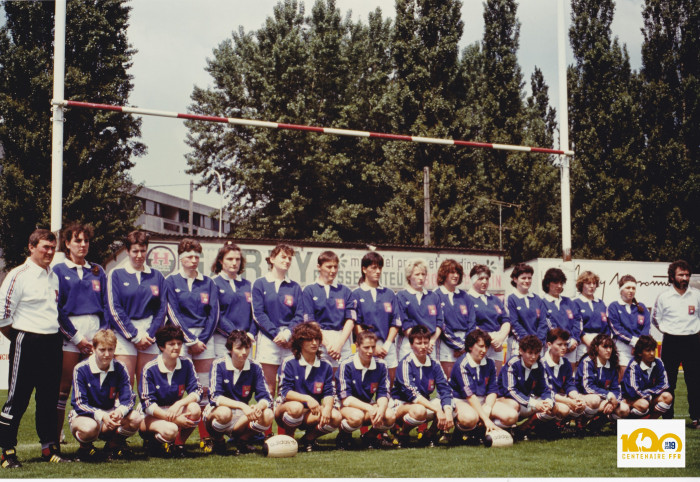 This week, it will be the England Women travelling to Pau for the opening match of the Women’s Six Nations against France. But thirty-four years ago, plans were in motion to welcome a French team for the very first international women’s rugby match on British soil. In 1986, a Great British team was formed, and the two sides met at the Athletic Ground, Richmond, on Saturday 19th April.

The game was seen as a ‘leap forward of unquestionable magnitude’ for the women’s game in Great Britain, even if some reporters were sceptical about the speed at which a national side had been formed given the relative youth of women’s rugby. The WRFU, the national governing body for women’s rugby in Britain and Ireland, had only been formed in 1983, initially featuring twelve clubs, all but one of which were based at universities. But the game had grown immensely in just three short years, and for the organisers the increased media attention that an international fixture could draw was worth the risk of losing to the more experienced French side. Women’s rugby at the time still had a number of vocal detractors, but some journalists saw the GB v France fixture as an opportunity to change the negative opinions: ‘Not only should everyone involved in the world of Rugby be there, but so too should every cynic, chauvinist and amusement seeker. For it is this match, more than any other yet played in this country, that will impress, inspire, and convert the disbelievers.’ (Alison Butler, Rugby News, April 1986).

The GB squad was captained by Carol Isherwood, but it was Karen Almond who captured journalists’ interest as the double-try scorer for team GB. Her two tries were not enough to halt the experienced French side, with the game ending 14-8 to the visitors (unconverted tries were worth 4 points at the time).

Carol Isherwood not only captained the team but was instrumental off the pitch as well, arranging the match and organising selectors, coaches, grounds, media. She recalled a slight mix-up as the French arrived – due to a lack of communication, the WRFU representative had gone to welcome the French team at Heathrow, when the team actually flew in to Gatwick! As a player, Isherwood was at a final team run through at the time, but immediately hopped in her car over to Gatwick and smoothed over the mistake and got the French to their accommodation. Isherwood herself returned to a friend’s house, where she was staying as the WRFU budget had not stretched to team accommodation for the home squad, despite many of the players not being based in London. She later recalled that her hosts were all going out for a curry, and, conscious of her nutrition the night before a game, Isherwood ordered omelette and chips the night before captaining her first international, the first GB international, against France. Given the incredible development in women’s rugby since 1986, it’s unlikely any England players will be hitting the curry house on Saturday night ahead of Sunday’s Le Crunch fixture, which is shaping up to be the biggest test for England’s aim of retaining the W6N trophy in 2020.

Dr Johnson, who thought it sufficient for a dog to walk on its hind legs or a woman to preach, never mind whether it was done well, should have been at the Athletic Ground, Richmond, yesterday. There, women not only played their first rugby international in this country but played with a fervour and commitment that echoed many of the battles between these rugby-playing nations.

The principal difference was that they kicked many fewer penalties and, recognising their limitations in this respect, ran and passed much more often than do their male counterparts.

Indeed, the game started with Britain's scrum-half fielding the French kick-off and releasing her centres at the opposition; and then, at the breakdown, the French getting the ball to their left wing. It was a cracking start.
Initially, the French scrum was disconcertingly superior and the British women, pushed off the ball for the second successive time, had to yield a try.

For a time, the pattern of play held echoes of Twickenham and the Parc des Princes: the French overpowering the opposition up front and their backs looking adroit and pacy; the English forwards occasionally surging back at them with sheer cussedness - and winning penalties for French infringements and backchat.

But the home side also managed to get back on terms at the scrummage - a monumental achievement in itself. They did it, explained their captain later, by making sure they got themselves well set before the sides engaged.

Karen Almond of Wasps was Britain's most powerful and effective player. She came scything through on to a break by scrum-half Hill (another outstanding player who always made the ball available) and from five yards out had too much momentum to be halted. Then, on the outside of a blind-side move, she swept around the French flank for a second try and an 8-4 lead.

If the first half was splendid, with Britain apparently forging ahead, the second was somewhat anticlimactic. Eventually the French ended the stalemate when their left winger rounded the defence and, with all the players tired, there was no coming back for the British. Increasingly there were errors, and the referee picked up all of them.

Indeed, if anything came badly out of the game it was the laws, now seen in all their overkill glory, as innocent mistakes produced a stream of penalties.

The British women were able to react to the final whistle with elation, however, as they hugged each other. They had done well, and so had women's rugby.