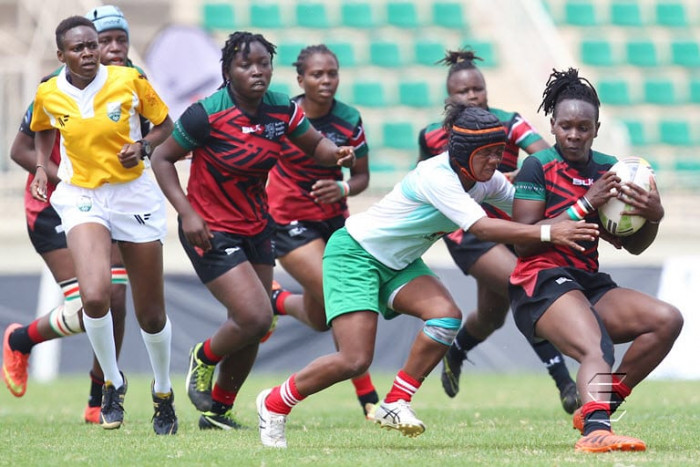 Madagascar and Rugby Africa gained the first rewards for their remarkable development programme on the island of Madagascar when their national team beat Africa's number two ranked team – Kenya – in Nairobi yesterday (Saturday).

Madagascar only played their first test match in 2019 when the competed in the Africa Gold Cup, losing heavily to South Africa and also to Kenya, but ending with a draw against Uganda.

Ten years ago the nation had only just started to play sevens internationally, and then generally only against other Francophone islands in tournaments such as the Reunion 7s.

Today rugby is massive in Madagascar, with huge crowds attending key league games – and an estimated 60% of players are women.

The island is divided into 22 regions, each region having at least one club, and the island now has 11 women’s leagues. According to Rugby Africa, 20% of women players also participate in coaching and referee training helping drive the game’s remarkable growth.

Kenya, on the other hand, have been playing test rugby since 2006 and are still in contention for a place at the World Cup, with a playoff against Colombia still to come, and a sevens squad on their way to the Olympics for a second time.

That Olympic programme did impact on the Kenyan selection for yesterday’s game, with many of the country's most experienced players unavailable due to sevens commitments.

The game – as with all of the test matches taking place in Africa this year - was played as a “curtain raiser” to a men’s Africa Cup playoff tournament, and it was Madagascar that got off to a flying start in the game, wreaking havoc especially on the outside channels with their fast-paced players crossing line twice in quick succession for an early 14-0 lead after successful conversion of both tries.

Rocked back by this start, it was midway through the first half before Kenya began to settle, scoring their first try , but the Malagasy women responded immediately with a third try, again moving the ball wide and using the speed of their wings, to regain their 14 point lead.

The Kenya Lionesses moved to keeping the ball with their forwards and were rewarded with a rumbling second try, but Madagascar responded with a penalty to take the game to 22-10 at halftime.

The Lionesses emerged for a different, more determined, side and continued to use the forwards making good use of the lineouts to maximum effect. That route led to their third try as the pack drove over the line to pull them to within a try of the visitors at 22-15.

Kenya tried to retain possession as a means of nullifying the threat of the Malagasy backs but that dominance could not be translated into points. Then, against the run of play, Madagascar broke away in typical fashion and got their fourth try, and the final score of the game, which ended 27-15.

The two teams will meet again on 11th July.

Three days later on 14th July Uganda will take on Zimbabwe for the first of a two test series in Kampala, the second test in that series being on 18th July.