Fleetwood making most of life in lockdown

We spoke to England star Vicky Fleetwood, whose fitness at home videos during lockdown have been proving hugely popular and who is itching to get back on the field after her stand-out season for club and country. 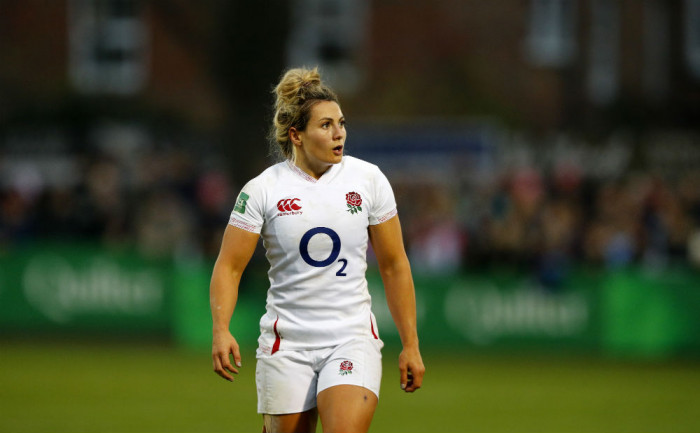 There is a point midway through our conversation when England star Vicky Fleetwood encourages me to take part in her latest fitness video for England Rugby. It involves circuits using tea towels for all sorts of strength based exercises.

The personal trainer is clearly passionate about fitness and I am almost persuaded (though not quite) and can see just why has been gaining a strong following in the rugby community for the workouts she posts online and through the media – much like other England and leading club players like Rachael Burford and Leanne Riley.

Fleetwood can see that being in lockdown as an elite athlete when you know exactly what you should be doing is a real benefit.

“I am very fortunate to have a grounding in what sort of work I should be putting in. Most of the girls will be working from programmes we have been given but there’s loads of experience like mine in the team so people are pretty clued in.”

With the majority of England’s coaching staff furloughed and so unable to work,  the country’s top players are not as connected at this time as they might otherwise have been but Fleetwood – one of England’s best players this season – says the players will just get on with it.

“You just adjust. My boyfriend is also a rugby player so we have been able to practice things like passing and skills and keep on top of that and lots of the players are in regular contact regardless.”

On the day we speak, Fleetwood has done three sessions and is making full use of a wattbike and other equipment she has at home.

Her story is undoubtedly one of the most interesting in the England team.

A World Cup winning hooker who left the front row to play 7s at the Olympics and Commonwealth Games before shifting back to 15s and then into the backrow – she has quite the story and the memories to look back on when she hangs up her boots.

Her performances in the backrow this season have been outstanding – with her player of the match performances and all round superb work ethic standing out. She can lament losing the momentum without losing sight of the bigger picture of the moment.

“We’d love to be playing but that’s life. As a team obviously we were on good form and 6 Nations Grand Slams don’t come around all the time so it would have been special to do it together.

“Of course this has to happen but when you feel you have momentum it’s frustrating.

Fleetwood also enjoyed a proper run in the seven shirt with an injury to her Saracens clubmate Marlie Packer, and she accepts the prolonged stint had worked for her.

“I am a confidence player like lots of others, so the more I play the better I feel.  I was loving getting a run in the team and playing seven. I feel like I have found my feet with it.

“Obviously I am a totally different player to Marlie – at club level we play either side and we work really well as a combination but obviously we are competing for the shirt at England so this year I felt I was able to put my hand up.”

Fleetwood’s pace and fitness had always marked her out as a different sort of front row – but it had been almost unheard of for test front rows to switch to playing test 7s.

Her move in the Olympic year was a two year contract, before she returned to play in the 2017 15s World Cup, then back again for a Commonwealth Games stint. She says she is firmly staying in the 15s game now.

“I absolutely loved my 7s experience and it massively improved my fitness and then my workrate, which is something I pride myself on.

“Coming back after the Commonwealth Games I was obviously hoping to come back to the backrow. I had actually had a chance to play seven for England on a tour in 2013 to the US. I absolutely loved it but I think the coaches afterwards still saw me as a hooker but with the ability to play like a fourth backrow.”

Becoming an all round seven

“I think as a seven now, I have learned to work smarter and not just harder. It’s about knowing when the right time to go for something is, when to hit a shorter line that sort of thing. I am loving it.”

Despite her strength and fitness – she is one of the fittest players in the England team – Fleetwood says she has also worked hard on her footwork and skillset.

“I am not the biggest and you do come up against some taller backrow players but as Nolli Waterman always says, tackling is a mindset! I think I use my feet well and manage my size well. If I am running into a player like Safi N’Diaye for example I am not going to run straight into her. I have some pace and footwork so I can use that.

“There are some great backrows out there who are not necessarily massive – like Claire Molloy who has incredible workrate and has made seven work for her talent and skill. She is a quality player”

Despite England’s almost total dominance in Europe, Fleetwood insists the standards are getting better.

“All of the nations are improving. I know the scores don’t necessarily suggest that but it doesn’t feel like there is a huge gap when you are playing the games. When we played Wales  in the 6 Nations we put up a big score but the match was physical, it was hard, it didn’t feel easy.”

With no rugby being played at the moment, the conversation naturally drifts to reflection and she doesn’t hesitate when asked her favourite tam and place to play.

“I love playing France in France. It never disappoints. They really get behind the team and the numbers are always massive. The game in Pau this year was incredible. It was packed, it was 25 degrees and it was a great match. Then we played in the snow the following weekend. Safe to say this is one 6 Nations we will never forget”

“I love playing New Zealand too obviously. We played them before a Lions test in 2017. I was on the bench but got about 25 minutes and the atmosphere was just something else. It was incredible.”

Saracens, Fleetwood’s club, were top of the table in the Tyrrells Premier 15s when the season was halted, and since then there have been major developments in the league with Exeter and Sale Sharks joining.

“The standard really is on the up now and it is exciting. Yes, there were some gaps between the top and the bottom last season but you still had to work in incredibly hard in every match. I remember games in the Premiership before where you could say – well this player is a weak tackler so let’s really target her – that sort of thing just doesn’t happen anymore.

“Of course you can’t help but be frustrated that the entire season is now null and void, especially how we had been going but you can do nothing about that.”

It is a shame that the season wasn’t finished especially with Harlequins and Saracens setting such standards at the top of the table.

The two played out an incredible game in December with Quins going 24-7 up only to lose 27-33.

“It was an amazing match,” Fleetwood recalls.

“It was funny, even when we went four tries down I don’t think anyone felt we couldn’t get back into it. We had barely had the ball and whenever we did get into a good place on the field, Emily Scott was booting it right back to our try line. But we didn’t get stressed about it. It’s such a big rivalry now and everyone wants to play in those games. It’s really exciting actually to be involved and I can’t wait for next season.

And so say all of us.