We speak to Cristina Flores, who is standing as a candidate to be elected to World Rugby's important Executive Committee. 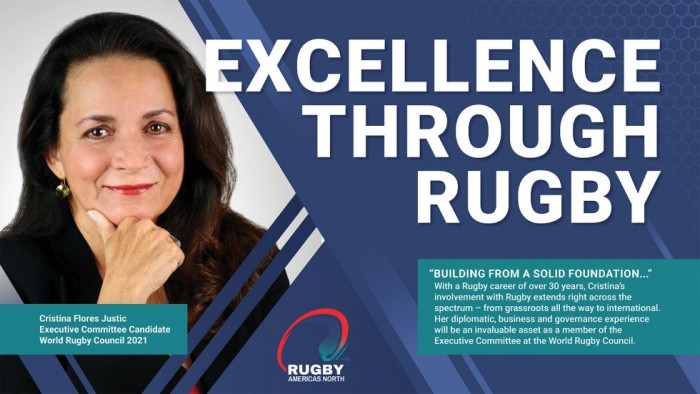 Flores is one of two female candidates vying for a spot on the committee, which is currently made up of 10 men and one woman and is the game's most important day to day decision making group.

We've written an open letter here to Council members urging them to deliver on their commitments to advancing women in rugby and we ask Flores what she feels she can bring to the position.

Flores has wide-ranging experience in rugby, having played at amateur level and served on the boards of the Mexico and Canada unions.

Why have you decided to stand for ExCo?
I believe that I have the right skills to add value and to bring a balance which will enable the ExCo to positively shape the future of rugby. I know the game well, having started to play in 1979, as well as serving on various Club, Provincial and National Boards. I have a designation in Corporate Governance from the University of Toronto and those skills will help me bring about governance best practices to the ExCo.

What's your experience been like on the Council so far?
I’m very fortunate to have two members from RAN (Rugby Americas North) who sit on the World Council, who have mentored and supported me. They have been available to help guide me on a steep learning curve, so my experience has been very positive.

My exposure to different cultures and languages has been a great asset on the Regional Committee, where I’ve been able to communicate and participate in the exchange of ideas and important concerns we share with other regions. I’m honoured to have been asked to form part of the Governance Workgroup as well as the Finance Advisory Committee.

Give us a sense of how rugby is developing in your region and how important it is that the region has a stronger voice in the main places of decision
I truly believe that the North American Region has huge potential for the future of rugby. In the past two years, despite the pandemic, there has been amazing progress on a number of fronts. Awareness and promotion of rugby by the MLR (Major League Rugby) has been strong and there have been big steps forward in gender equality, not only in the game, but in leadership roles.

There’s also been the emergence of some incredible men and women who are really moving the needle in their Unions. It is important that they get more exposure and the opportunity to contribute on the Global stage.

What's your view on how World Rugby have worked to improve gender diversity across all its committees?
The work lead by Katie Sadler and the “Unstoppables” campaign has done a lot to raise awareness, and they are still working hard to promote this through successful workshops and programmes such as the Executive Leadership Scholarships awarded every year to help women in leadership positions.

Bill Beaumont and the World Rugby Team have assigned all of the female Council Members to the standing and advisory committees, where they bring their knowledge and expertise and contribute to much needed change. Two very important committees are now Chaired by women, the Audit and Risk Committee and the Anti-doping advisory committee. Altogether that is great progress, but we still have a way to go, and this election presents us with the perfect opportunity.

Why is gender diversity on boards and committees important?
Women have a different perspective than men and bring a different approach. They force groups to think outside of “their” box and of course we know that there are many studies that show that women on Boards are beneficial to the bottom line

Aside from the fact that it makes sense, more than 25% of the rugby membership base is female and they should have representation to reflect this. Boards and committees are enriched not only by gender diversity, but by diversity and inclusivity in general.

Why should Council members vote for you?
They should vote for the person who is best suited to sit on the Executive Committee at the present time, and for the all the reasons stated above, including gender diversity, I believe that would be me.

If you join ExCo what will your main priority areas be?

1) Better governance to achieve a high-performance Board who will be able to navigate challenging times ahead.

2) Youth and development at the grass roots level to build a strong base for our game.

3) Player Welfare in all its aspects, not just head injury, which is very serious. We also need sound protocols to prevent harassment and/or abuse. We can learn from the experiences of other sports that have failed to protect their participants in this area.