USA women’s rugby head-coach Kathy Flores has finalised her World Cup squad. Flores has named her squad ahead of a three-week camp with her players being held in Maine before departing for England. 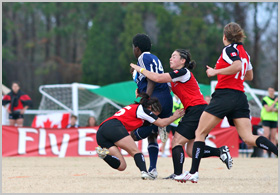 The USA come to the event on the back of a two-series test loss to their nearest rivals Canada.

There are 26 players named plus four reserves - two of whom are half-backs with Flores giving the nod to 7s specialist Christy Ringgenberg who has done enough to impress in recent games at fly-half.

The squad is a blend of solid experience as well as some emerging players with seasoned campaigners like Ashely English and Phaidra Knight named alongside the likes of relative international newcomers Stacey Bridges and Emilie Bydwell.

It is never an easy task to trim down a squad we have been working with for almost four years, she said.

With the 2010 World Cup less than two months away, we are working to prepare for every variable possible and select according to the needs of the team, in regards to the commitment and dedication of each individual and their contribution to the squad.

Assembling on July 10, the USA squad will hold a residency camp at Bowdoin College in Brunswick, Maine for three weeks before departing for England.

The US. Women will feel right at home in the colleges top-notch residential and athletic facilities, Womens High Performance Manager, Alex Williams said.

Bowdoin is home to one of the few womens varsity rugby programs in the country and its a great environment for the intense final preparations prior to the World Cup.

Flores plans to use the camp for individual and unit skill work, along with strength and conditioning sessions, video analysis, and creating game plans for its upcoming RWC pool matches. Brought into the camp will be additional skill specialists, sports psychologists, nutritionists and select media personnel who will all work with the players and staff in preparation for the teams biggest event of the year.

The squad will also get some game experience when on July 25, the US squad will play the Northeast Rugby Union All-Star Womens Team in a final warm-up match for the Eagles.

The US. will also have one week of preparation and once landing in England, prior to the kick-off of the World Cup.

The fifth-ranked USA Womens Team is in Pool B along with second-seeded England, Ireland and Kazakhstan.

The USA will face the 11th-ranked Kazakhstan, first, on Friday, August 20. Four days later, the USA will play the eighth-seed, Ireland side, on August 24 and will finish against England on August 28.

We dont have the luxury to look past any team at the Womens Rugby World Cup, Flores added. While we were playing Canada in June, Kazakhstan played close matches with South Africa. Ireland is lining up practice competition in the coming month and I am sure England will be training and lining up practice matches as well. No team is taking anything for granted in this event.