Four sides still in the race for WC

Spain and Italy preserved their unbeaten run at Europe’s World Cup Qualifiers yesterday but Samoa and Scotland are also still in contention ahead of the final round. 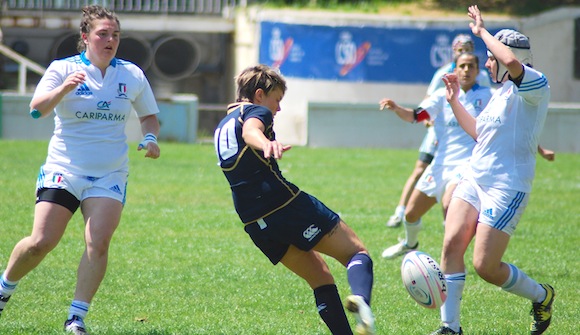 Spain and Italy are leading the table (from which two sides qualify) but face each other in a crunch match at the weekend.  Spain currently have 10 points with Italy sitting on 9.

Samoa were the other side to win yesterday, beating Sweden with a bonus point and seeing themselves now sitting on 6 points. A big win for Samoa at the weekend, could well see them through depending on the margin of the Spain v Italy game.

Scotland too, despite defeat to Italy, still have a chance of qualifying. They need a huge win over Sweden this weekend and need to hope other results go their way.

Italy were too clinical for Scotland in the opening game yesterday. With the scores level, 3-3, after 34m, turnover ball twice in succession allowed the Italians to score and convert, putting them 17-3 ahead at halftime. The gap was too much and a further converted try and penalty in the second half made it 27-3 by the final whistle, some solid tackling preventing the Italians scoring again to take a bonus point, which might be crucial at the weekend.

Samoa made up for losing their first game to Italy with a powerful performance over Sweden.
The Manusina got off the mark early, scoring two tries in the first 16 minutes.
The Samoans then turned their pressure into points with another 2 tries before the break, and wrapping up the bonus point by half-time. Sweden were much improved in the second period and looked close to scoring, after Samoa scored early but Samoa took out a vital win.

Spain delighted their home crowd with a huge win in front of a large group of spectators. This match was one-way traffic with Spain leading 40-0 at the break. Netherlands enjoyed some brief spells in control, but never really threatened during the first 40 minutes. The second half was again totally dominated by Spain who clocked up six more tries before the referee signalled the end to a tough day at the office for a young Netherlands side.