Welsh winger Jasmine Joyce wrote her name in the Barbarians history books with four tries on her debut against the USA in Denver with the fullback's finishing enabling the Baa-baas to snatch a 34-33 win in Denver on their first outing against an international side. 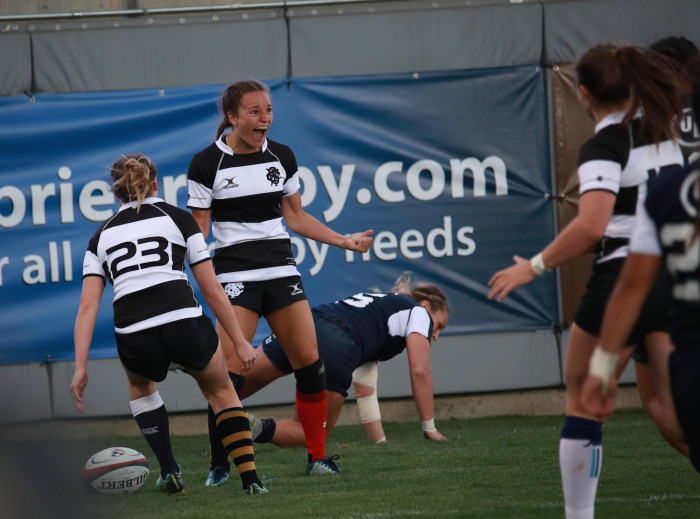 They were backed up by outstanding veterans like England’s 137-cap prop Rocky Clark and New Zealand’s treble World Cup winner Linda Itunu, who captained the side from No.8.

That experience enabled them to keep their cool when the USA rallied in the final quarter with captain Kate Zackary scoring to put them in front with three minutes remaining. The Baa-baas duly recovered the ball from the kick-off and moved it wide where Butchers’s elevated assist put Joyce in the clear.

The Barbarians had started well when flyhalf Elinor Snowsill delayed her pass and fed a short ball to Joyce, and she was through for a brilliant score.

The USA hit back through a score from centre Amy Naber after she intercepted a pass and raced 50 metres to touch down.

Naber then had a big hand in the next score which resulted in a good team try from the hosts.  Prop Catherine Benson powered through a few tacklers and linked with scrumhalf Carly Waters. The ball eventually made its way to winger Neariah Persinger who finished brilliantly to score.

The 12-7 lead meant the hosts grew into the game with confidence and it took till after the half hour mark for Joyce over power over again, scoring from a turnover.

Joye had her third a few minutes later, powering through a raft of would-be tacklers. Now 19-12 up the tails were up for the Barbarians with Irish flanker Paula Fitzpatrick racing through a hole, linking with with American Carmen Farmer, and then Alison Miller, finished in the corner.

Scottish center Helen Nelson cut through just before halftime and and she sent flanker Alisha Butchers for a try and a 29-12 lead at halftime.

The US were much better after the break and Eti Haungatau powered over early to score a try. Both sides cancelled each other's defence for much of the rest of half until the last ten minutes which brought plenty of drama.

Persinger grabbed her second to put just 5 points between the teams at 29-24 and when Gabby Cantorna hit the conversion there was just three points in it.

Captain Zackary then raced onto a pass and sprinted from 50 meters and having been down 29-12 ,the USA found themselves 33-29 ahead!

There was to be another chance for theBarbarians in the final play of the game and when Joyce latched onto a wide pass, she sprinted away to score and win the game for the visitors who next play England.

"It’s pretty awesome to get four tries and playing in that position at full back was pretty special,” said Joyce.

"To get the last one, it was a team performance and all I had to do was run. Playing with such world class players was easy for me. I just run and put the ball down."

She insisted going behind — the Baa-baas had been 29-12 up at half-time — with time running out didn’t frighten her teammates.

"We had a game in the Six Nations where the exact same thing happened,” she said. “There were about three minutes to go, they scored and one of the Welsh girls came on and said ‘look, it takes 30 seconds to score a try and we’ve got three whole minutes’ and we did it.

“It was an awesome take by Carmen (Farmer) in the air to receive the ball, the forwards set a platform to swing it wide and I just had to run a bit and put the ball down.

"Next for me now is to go back to Wales, play some Sevens and hopefully qualify for the World Series qualifiers and just go from there. Playing England in June? I hope so, I just have to wait and see what the Welsh say but I hope so. I’d love to be playing."

Head coach Anna Richards, who will be in charge again at Twickenham on June 2, identified more performances to savour — as well as commiserating with Bristol’s Amelia Buckland-Hurry, who pulled out after injuring an ankle in the warm-up.

"It was a bit of a dog fight in the second half and I thought America did great, kept the ball alive and scored some great tries,” said Richards.

"I never had a worry, I always thought the girls would come back. Thirty seconds is a long time and I’m proud of their effort, their attitude and I think they did the Barbarians proud.

“Alisha [Butchers], we weren’t expecting to play the whole game, but look at her two great passes and a try and she nearly had a second. Helen Nelson, who played at 12 and usually plays at 10, was amazing. There’s not much to say about Joyce! The insides gave her the room to show the magic she can create.

"Carmen Farmer played a huge game. She got their ball back from the kick-off that led to the last try, she made some great tackles. She was a stand-out.

"For me, just to be involved with the quality of the players we were able to get for the Baa-baas has made it a real privilege and a pleasure this week. And fun. I told the girls, 'no matter what happens just get out there, smile and enjoy it, look after each other'.