France and Wales on top in U18s

France and Wales, unbeaten on the first day of the U18 festival, continued their form to finish their week in Edinburgh on a triumphant note. 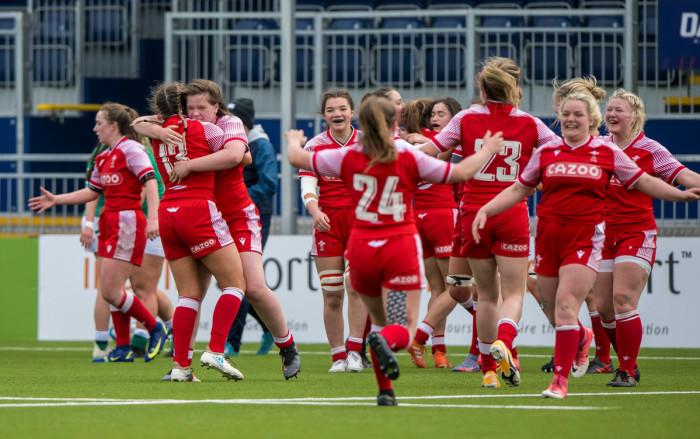 While home side Scotland picked up a dramatic victory and Wales made it three wins out of three, as the inaugural Six Nations Under-18 Women’s festival came to an exciting conclusion at the DAM Health Stadium in Edinburgh, it was France who turned heads with a huge win against England.

The three matches were all 70 minutes in length, extended from the six clashes that took place on Saturday.

Wales kick-started the final day of the festival by continuing their perfect campaign with a hard-fought 17-10 win over Ireland to make it three from three.

They took barely a minute to hit the front and then scored two tries in two minutes to start the second half to take the win.

The opening try was a beauty, finished off by Nel Metcalfe after some brilliant build-up. From a lineout near halfway on the right, the ball was quickly shifted across to left winger Metcalfe who had enough space to get around the covering defence and over in the corner.

Ireland responded and levelled the scores at 5-5 when fly-half Kate Flannery stepped out of a couple of tackles before dotting down on 18 minutes.

That was how it remained until half-time, but after the break Wales seized control. First Molly Wakely went over from a rolling maul and then almost from the restart, Wales opened up space on the right, with Grace Bellamy getting away before feeding Lowri Elias to go behind the posts.

With the conversion, Wales led 17-5, but Ireland hit back ten minutes later with a fine finish from loosehead prop Hannah Wilson.

That was as close as they got though as Wales closed out the win.

In the second game of the day hosts Scotland faced an Italy side aiming to score their first points of the festival.

And it was a dream start for the tournament hosts when Sophie Langford intercepted a stray pass for the game’s opening try with just 20 seconds on the clock.

Sky Phimister then dotted down after a fine break down the left wing, with the extras added to make it 12-0.

And she wasn’t done there running in her second score after stealing a loose pass close to the halfway line to put Scotland in control.

Italy did bounce back with three tries of their own, with a double from Vittoria Zanette to close the gap to just two points at half-time.

Although the second half wasn’t as high scoring, it was full of tension with Le Azzurre within striking distance for long periods without anything to show it for it.

And with not long left, it looked as if Italy would steal the win when Matilde Romersa managed to inch over, after a sustained period of pressure on their opponents try line.

But the subsequent missed conversion would prove crucial, with Scotland creating wave after wave of attack and re-taking the lead with just four minutes left when Nicole Flynn dived down in the corner to rescue a dramatic 24-22 win.

England were in action in the day’s finale taking on a France team who beat them 29-7 just four days previously.

Once again, France looked well drilled from the off and were first to get on the scoreboard after just eight minutes when scrum-half Maewenn Magnabal dotted down. A second quickly followed after an England handling error gave Lina Tuy a simple try to make it 10-0.

The third score of the half was the pick of the bunch with a flowing France attack ending with some clever quick hands, giving Marilou Le Calvez the chance to dot down.

Amalia Bazola added a fourth try not long after, but England did finally have something to shout about just before half-time.

A clever up-and-under was well read by Katie Shillaker who gathered superbly and scored to narrow the gap.

But a brilliant burst from Suliana Sivi restored France's advantage just after the break with a clever sidestep and acceleration to get away from the England defence.

Both sides exchanged further scores with Molly Luthayi and Mariam Niakate both dotting down, before a French flurry in the closing stages.

Oyanna Capon and Bazola’s second, Aminata Niakate, another from Sivi took their side up to ten tries in total, before Maya Grat went over in the corner.

And there was still for another from Grat to get the final word, wrapping up the win by a score of 72-10 to France.