A 22-12 Cup final win over Russia seals victory in Kazan for France. 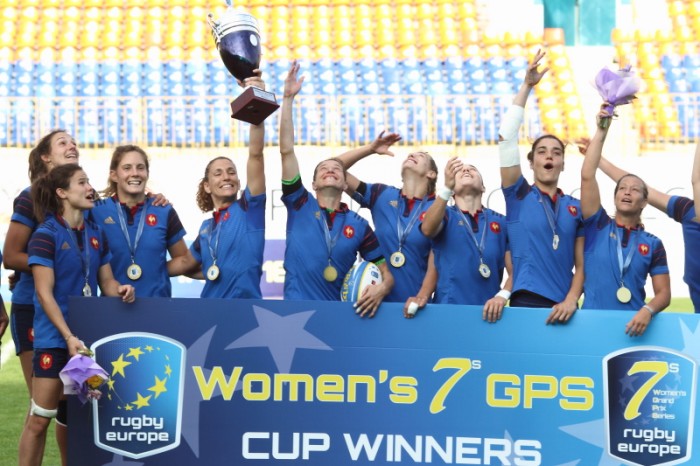 France led from the outset taking a well-deserved lead through centre Shannon Izar, who scored her sixth try of the competition. Russia hit back with a try from Baizat Khamidova, but a determined France side pressed on to secure victory.

After two days of sevens rugby, France were crowned champions on the back of impressive pool wins over Finland, the Netherlands and Great Britain 2 on Saturday. There were solid performances from Fanny Horta and Camille Grassineau through Sunday’s quarter and semi-finals against the Netherlands and Ireland, before their defeat of Russia in Sunday’s showpiece final.

Runners-up Russia had excellent tournament, with Daria Lushina being particularly impressive over the course of the weekend. The youngster, who scored in the final, topped the player rankings in Kazan, scoring 49 points including three tries and 17 conversions.

Great Britain’s two teams were also in action this weekend. The Royals and the Lions showed great promise as they prepare for the sevens tournament at the Rio Olympics later this summer. Great Britain Royals lifted the Plate, beating Spain 44-0 in the process. Great Britain Lions defeated Ireland 32-0 to claim third place. There were outstanding performances from Jasmine Joyce, Megan Jones and Stephanie Johnston who scored six tries each, making them the joint top try scorers.

In Sunday’s other games, Italy won the Bowl with a dominant performance over Belgium. The Italians ran out the 19-0 winners with Michela Sillari and Sara Barratin among the try scorers.

The Kazan Sevens saw some high scoring results with France, both Great Britain sides and Russia showing their superiority on the pitch.

After an excellent start to the Sevens Grand Prix, both France and Russia have put themselves in pole position to take the overall series title later in the year. The next leg of the Rugby Europe Women’s Sevens Grand Prix is in Malemort, France on 24-25 September, and all teams will be looking to build on their performances in Kazan this weekend.