France eased to a 50-0 over France in Cardiff in round 3 of the women's 6 Nations. 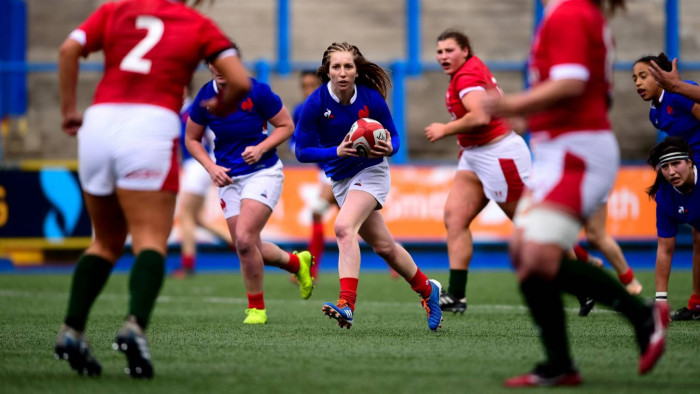 France were full value for their win and scored eight tries in total with Cyrielle Banet and Laure Sansus both scoring twice.

Victory takes France’s record against Wales in the Women’s Six Nations to 16 wins in 19 fixtures, while the hosts' search for a first victory in this year’s Championship will head to title-chasing England in Round 4.

Wales fell behind to an early French try as wing Banet raced clear to score in the corner and the conversion attempt from out wide was unsuccessful.

Wales responded well to going behind, with Gwenllian Pyrs making a number of powerful carries, but the final moment of quality eluded them – Lisa Neumann knocking on with room to run in the 22 in one such instance.

Alisha Butchers was putting herself about physically, but she also showed deftness of hand with one nice pass out of the tackle.

Wales’ problem was they could not convert their field position into points as captain Siwan Lillicrap brushed off a knock. France finally got some possession after long periods of Wales dominance and they showed the home side how to be clinical.

The away set-piece had been very good all day and from a scrum close to the Welsh line, French scrum-half Sansus was the one to pick up and dart over. The conversion from Tremouliere was good.

It was a cross-kick to the corner which led to France’s third try.

Banet grabned her second after the excellent Bourdon had booted the ball to her in space. Tremouliere’s conversion attempt was successful as Wales turned around 19-0 down.

Wales had also lost back Kerin Lake in the first half as she departed for a head injury assessment to be replaced by Lauren Smyth. Unfortunately for Wales, France only moved further clear in the second half.

Lock N’Diaye crashed over from close range and Tremouliere converted. Sansus then grabbed her second of the afternoon as she picked up from a pack surge and went down the blindside to score with ease.

The conversion went wide, but the French scoring continued. Menager raced clear down the left wing to score and Tremouliere converted from wide out.

Flanker Annery and replacement back Boudaud completed the scoring late on.