A completely different France team from their opening game overturned the Black Ferns on the third day of the Super Series. 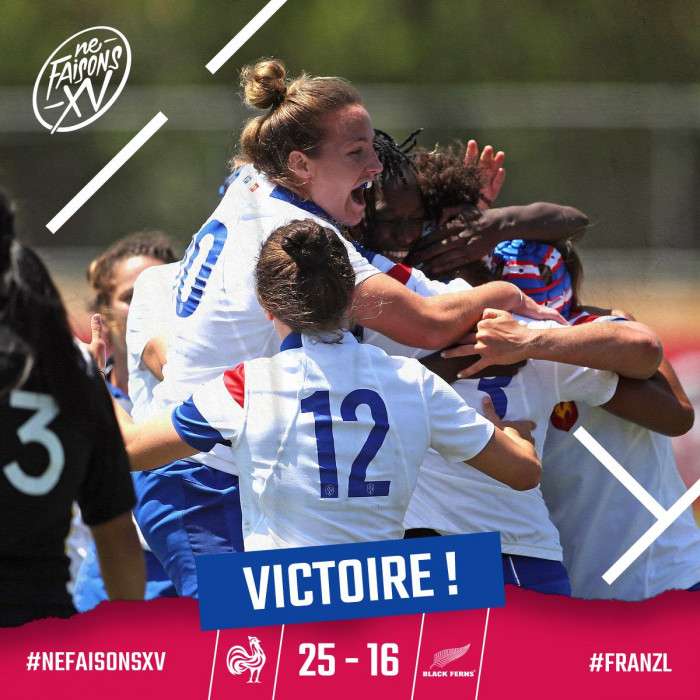 This was the Black Ferns 100th test match (we think, see below!), with Kendra Cocksedge captaining the team as she celebrated her 50th cap, and based on France’s performance in their opening game against Canada a relatively straightforward win was expected.

France’s preparations were also less than ideal with Safi N’Diaye withdrawing from the series with an injury to add to Romane Menagers absense. However, World Player of the Year Jessy Tremouliere was back in the team – and she would ignite a remarkable change for the French team.

If the Ferns were over-confident at the start, they were soon disabused of their belief. Barely seven minutes into the game as Caroline Boujard, busting through the defence, scored to the right of the posts.

Tremouliere missed that conversion, but four minutes later she was on the board with a penalty, and six minutes later a second penalty hit the post – but Maelle Filopon was quickest to the rebound and scored under the posts. With Tremouliere convertong France were 15-0 up after just 17 minutes.

New Zealand were finally on the board after 24 minutes when Cocksedge slotted a penalty, but Tremouliere restored France’s lead shortly after, but a Cocksedge penalty just before half-time sent the teams in with a 18-6 lead for to France.

A third Cocksedge penalty pulled New Zealand to within nine points, but with 20 minutes to do Tremouliere was on hand to extend the French lead with a well taken try. 25-9 was the score, was there any way back now for New Zealand?

With ten minutes to go it looked like France were going to wrap it up as they hammered away on the Fern’s line, but magnificent defence turned into attack. A desperate French rearguard first gave away a yellow card for Pauline Bourdon, and then a penalty try and yellow against captain Gaelle Hermet. It was now 25-16 with five minutes to go – more than enough time surely for the Ferns against just 13 tired Frenchwomen?

Au contraire! With the maxim of attack being the best form of defence, it is France who came closest to scoring – a try being disallowed for off-side. Only in the final seconds did the Ferns manage to get into the French half, and that came to nothing.

France had won, beating New Zealand for the second time in twelve months.