France hit back in their three test series against the USA by claiming the second test 27-25. 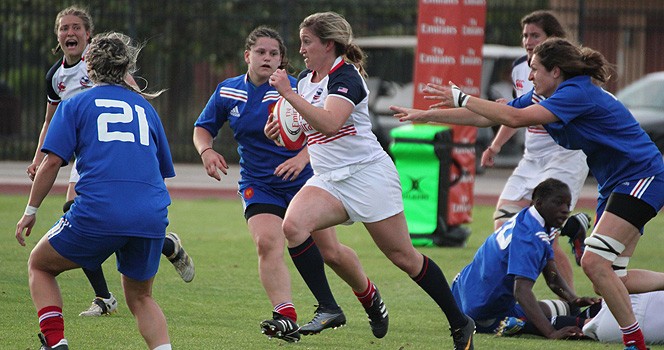 USA had won the first test with a fine second half comeback, but despite a late rally in game two, could not do enough to prevent the loss.

Both sides had made a raft of changes from the first game but the French capitalised on a slow start from the hosts.

“We played a great game and we improved from the first game and that is what we wanted to do,” commented  USA head coach Pete Steinberg following the game. “That was our goal, no matter the outcome.”

Flyhalf Aurélie Bailon was the difference-maker for France through her kicking and all round general play. The flyhalf notched five penalty goals as well as converted on one of France’s two tries. A well placed cross-kick also set up a try for Les Bleus.

France took an 18-3 lead into the break as the USA would turn around rueing handling errors and breakdown mistakes.

Bailon put over a penalty to start the scoring and the next kickoff was placed directly into touch, handing France the momentum. Following a few phases, a cross-kick saw French wing Laëtitia Esteves race away for the first try.

USA's Sadie Anderson turned the tables on the French through some fine kicking of her own and several line-breaks. Following a few minutes of pressure the Women’s Eagles got its first opportunity at points through a penalty kick. Anderson made the kick from 20-metres out to tighten the game, 8-3.

Midway through the first half, Bailon connected on her second penalty and following a knock-on from the USA in a lineout, France took advantage of their territory for a second try.

Assa Koïta dotted down after a break from Safi Ndaiaye for a decent halftime lead.

The halftime break was enough time to regroup for the USA as the team came out firing. Less than a minute into the half, Sharon Blaney crossed the line to make the score 18-8.

Anderson was able to keep the momentum going with a penalty kick and grinding it down the field through well worked forward play, Kate Daley scored another try which was converted.

Zdanczewicz was then binned after a late hit on Sandrine Agricole and the opportunity, directly in front of the posts, was converted by Bailon to make the score at 21-18.

Bailon slotted two more kicks soon after and despite a last minute resurgence by the Eagles, which saw Blaney cross the try-line for her second try of the game it was too little too late.

The final match will take place on Friday.