France gain some revenge for Twickenham

Less than 24 hours after losing to England at Twickenham, France have gone some way to making amends by beating an England team in the final of the Soustons Sevens. 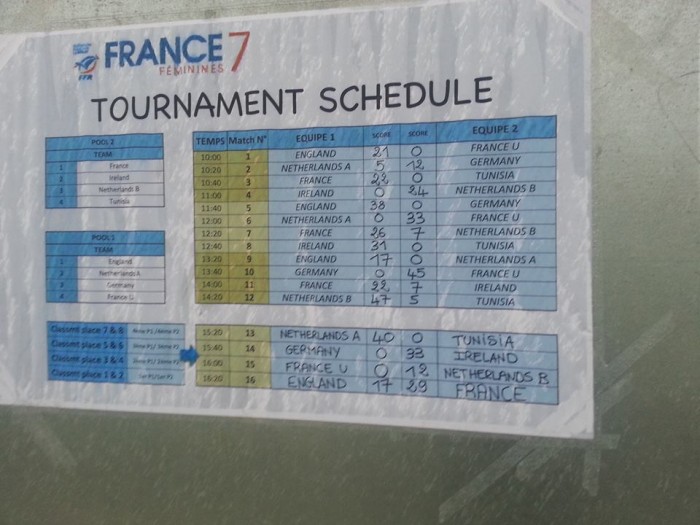 Played at Soustons near Biarritz, the tournament featured teams from six countries. France and Netherlands provided two teams, while England, Ireland, Germany and Tunisia sent one.

England sent a young but not entirely inexperienced team and were drawn in Pool B against "Netherlands A", Germany and France University team.

In Pool B France, selected from the players taking part in this week's sevens camp, drew Ireland, Netherlands "B", and Tunisia.

England comfortably made the final, not conceding a point as the swept past France Univ 21-0, Germany 38-0 and a (slightly misnamed) Dutch A team 17-0. Much to their undoubted joy, the German team began by beating Netherlands A in the first round 12-5, but then failed to score any more points during the day, allowing the University team to finish the pool in second place.

The French team were almost as comfortable, beating Tunisia 22-0, Netherlands B 26-7 and the young Irish selection 22-7. The strong Dutch B team - who will have have been disappointed by that loss to the French - still managed to reach the plate final thanks to a 24-0 win over Ireland, and a 47-5 win over Tunisia

Overall it was a tough day for the north Africans - that try against the Dutch "B" team being their only score of the weekend, as they lost to Netherlands "A" in the 7th place game 40-0. Ireland took fifth with a good 33-0 win over a German team that was possibly still celebrating that earlier Dutch win 33-0, and Netherlands "B" took third beating the French Universities 12-0.

And so to the final, which proved to be one of the best games of the day, the young English team putting up a great performance against a near full-strength French team, but going down 29-17.

In truth this was more a training event than a full tournament (the Dutch - with on 18 players - switched between the squads, as did several of the younger French national team who also played for the university side) but France will be pleased to end their camp with a win. They were well organised, but the standout French player was one of the University squad - Coralie Bertrand.

England coaches James Cooper and Susie Appleby will be delighted with the performance of their young team. Spectators were impressed by England's wing Siobhan Longdon-Hughes's power and pace.

The Dutch will have hoped to do better - but it was noticible that they have changed their tactics from last season, making more use of the width of the pitch. It is interesting chose to challenge their best formation against the full-strength French team rather than against the young English.

Elsewhere Ireland's young players will have gained more experience, Germany will be dining out on their Dutch win for some time - and Tunisia again know how far being one the best in Africa is from being competitive outside the continent.