France secured their spot at the 2016 Olympics by winning the second round of Rugby Europe's Grand Prix Series. 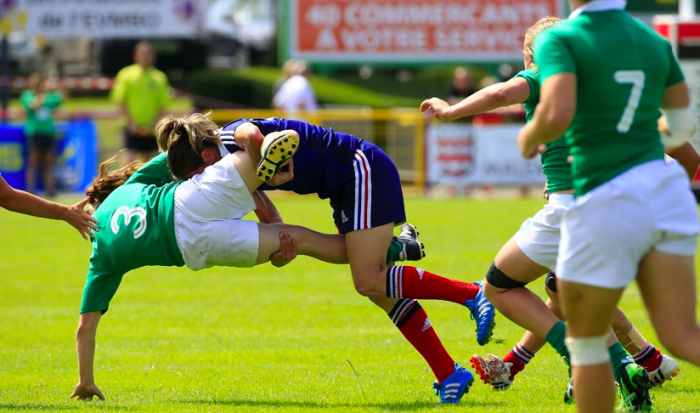 With Russia leading the rankings going into the tournament, France knew that an outright win here on home soil was essential while they also ideally needed Russia to miss out on making the final itself given their points difference

The best situation for the French would have been the two sides meeting in the semi final with France then having a chance to put their destiny in their own hands, and the opportunity arose with the French somewhat surprisingly losing to the Dutch to set up that exact semi-final having easily dispatched Portugal and Wales earlier in the day. If it was planned it was a gamble with no guarantees they would overcome Ireland in the quarters but in the end they did so comfortably.

The 20-10 loss to the Dutch therefore may have raised some eyebrows in the Russian ranks but to be the best you must beat the best and with France hammering Ireland and Russia beating the Ukraine, the stage was set for the biggest game of the two-legs so far.

This exciting climax came at the end of a tournament played in perfect weather and in front of a full stand full of enthusiastic spectators, but also one which had taken a while to catch fire. If the standard of play in the Grand Prix Series is pulling away from the lower divisions of the European Sevens Series, then it is also true to say that the standard of the leading teams is also pulling away from the rest. The Dutch win against France was also noteworthy as being the only game in which one of the four World Series teams - England, France, Russia and Spain - lost to any teams from outside the series. With only the full-time Dutch and Irish seriously troubling the WSWS teams, the opening two rounds were almost all one-sided affairs, the only exception being Wales' great performance against the a times fragile Dutch, who betrayed signs of the growing tension they are under during the game, but pulled through to record a narrow 21-19 win.

However the best performing team in the opening two rounds was Ireland who scored over 100 points in their opening two games against Scotland and Germany. Amee-Leigh Murphy-Crowe was on great form, finishing the tournament as the second highest try scorer after her hat-trick in the opening game. Ireland's game against England was therefore much anticipated - and justified that with a game that swung back and forth before tries from Abigail Brown and Alice Richardson (and more importantly Richardson's conversion) being enough to gave England a 12-10 win. That result also set up unusual circumstances for the final pool game between France and the Netherlands, the Dutch coming back from two tries down to dominate the second half and win the game.

Ireland's early form also had other effects, with pool opponents Scotland and Germany being forced into the bowl - and ultimately to relegation - despite some fine individual performances, with Germany's Alysha Stone in particular catching the eye, particularly against Scotland where she scored twice. in addition, with Italy's form - perhaps due to a large number of squad changes - significantly lower than in Kazan, Ukraine (with Olga Blanutsa in great form) reached the quarter-finals, and thus avoid returning to Division A.

Day two would be decision day. It would decide who would be relegated to Division A, which teams would play for places in the World Series, and who would go to Rio. The improved form of Ukraine and Portugal ultimately decided the first, and the quarter-final draw was sufficient to see Netherlands, Wales and Ireland reach the World Series playoff. For Ireland and the Netherlands, who the Irish again beat in the plate final, getting back onto the World Series is a must.

The Olympic qualifier went down to the final game. Playing at home always seems to inspire the French and - after their surprisingly large win over Ireland - so it proved again as they burst out of the starting game to race into an early lead before beating Russia 19-10 setting them up perfectly to nab the last automatic European spot with a final against Spain, who to their clear delight took a two try lead against England and then hung on to win 10-5, only their second win against England in rivalry spanning the whole history of European sevens.

The final was something of an anti-climax. France needed to win, and despite the absence of playmaker Marjorie Mayans due to concussion injury in the semi-final, they were imperious, racing into a 15-0 halftime lead before adding another try in the second half to wrap it up and with it a place at the Olympics. A second placed finish was a good return for the Spanish who will be pleased with their improvements and indeed their rare win over England in the semi-final.

England finished fourth overall having used the two legs to experiment with their team and they will surely be pleased with the results with a raft of new and fringe players impressing - not least the hooker turned sevens player Victoria Fleetwood.

Russia will now have to wait a year to know their fate. They are automatically through to the world repecharge next summer where they will be joined by three other European sides who make it through the next qualifiers in Lisbon next month. The qualifiers for that tournament were also finalised: Belgium, Romania, Finland, Sweden, Ukraine, Italy, Portugal, Germany, Ireland, Spain, Netherlands and Denmark.