France & New Zealand into the semis

New Zealand will play France in the World Cup semi-finals as both teams came through their quarterfinals unscathed. 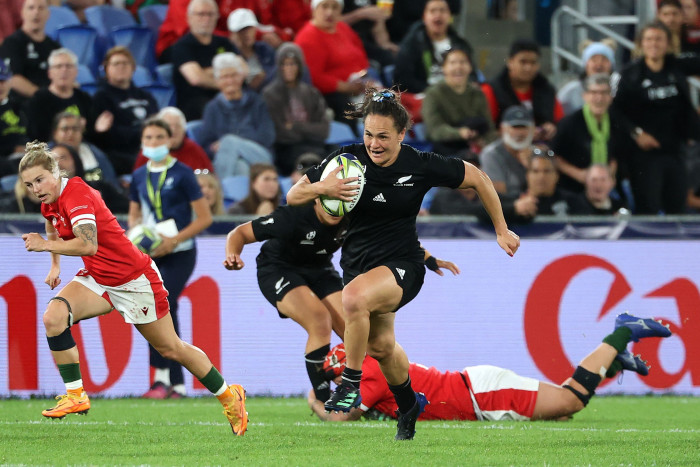 France scored 29 points in the second half to defeat Italy while New Zealand were in total control throughout their win over Wales.

France got off to a perfect start when they scored a try after just two minutes.

Both sides were guilty of nervy looking errors as the half wore on but eventually centre Michela Sillari kicked a penalty to get Italy on the scoreboard before winger Maria Magatti was then yellow carded.

A Drouin penalty made it 10-3 at halftime.

France were dominating the match but the inaccuracies in attack meant they failed to add to the score, with several would be try scoring opportunities going begging.

Caroline Drouin kicked a penalty just before Magatti returned to the field and it wasn’t till the hour mark that they scored again – this time they were awarded a seven point penalty try for a scrum offence with Silvia Turani yellow carded for Italy.

Three more tries came from France in the 65th, 68th and 70th minutes.

The first came from replacement hooker Laure Touye and then Grisez scored two to complete her hat-trick.

Though Italy didn’t have enough in their first ever quarterfinal there was an emotional moment towards the end as legendary player Manuela Furlan got a run out off the bench following a long-term injury.

New Zealand cruised to a 55-3 win over Wales in the second match of the day.

Wales started well and had the first chance at points, but the kick was missed and then in an indication of what was to came, the Black Ferns took their first opportunity to score.

Outstanding centre Theresa Fitzpatrick found Ruby Tui with a fine pass and the full-back popped the ball onto Portia Woodman to score.

That try meant she equalled the Rugby World Cup try-scoring record, drawing level with Sue Day on 19 and soon she would surpass it.

Keira Bevan did get Wales on the scoreboard with a 16th-minute penalty, but New Zealand’s backline were beginning to find their rhythm.

Around four minutes later, Ruahei Demant found Woodman with a cross-field kick and the winger sucked in the defence before offloading to Tui to score.

Sarah Hirini finished off an excellent team move to score just before the half hour mark and then Ruahei Demant put Woodman through a hole in a move that ended with Amy Rule scoring.

The Black Ferns continued to dominate in the second half and increased their lead further in the 43rd minute as Woodman finished off a flowing team move to notch a record 20th Rugby World Cup try.

The tries continued to flow – first Luka Connor was driven over the line and then Alana Bremner put her side 45-3 in front.

Wales then lost Carys Williams-Morris to the sin-bin and their task was made even more daunting when an injury to replacement back Megan Webb reduced them to 13 players momentarily.

New Zealand took full advantage, as Connor grabbed a second try and then, when Lleucu George had been shown a yellow card for a deliberate knock-on, Demant capped a fine individual performance by crossing the whitewash herself.