France open with win against 'Boks

A player of the match performance by Laurie Sansus ensured a good bonus-point win for France to open the World Cup. 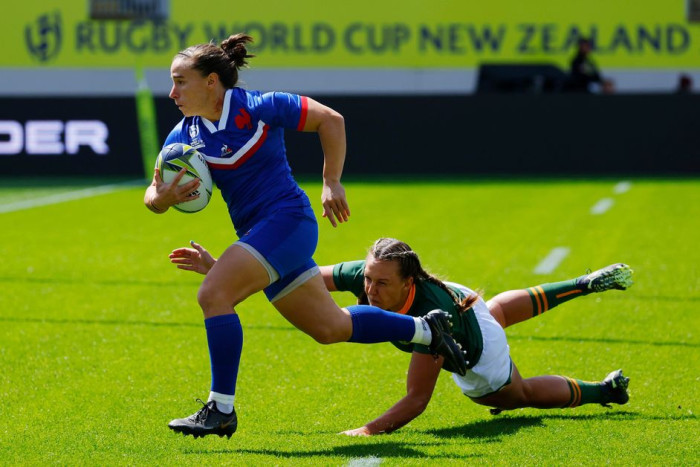 Laure Sansus scored the first try of the Rugby World Cup after only two minutes, offering an early glimpse of the challenge France intend to bring to tournament favourites England, Canada and New Zealand.

While France are ranked No 4 in the world, their star-studded lineup is expected to out-perform that ranking, and they impressed in the opener at Eden Park, beating South Africa 40-5.

Sansus is one of those stars, the player of the championship in this season's Six Nations tournament.

Centre Gabrielle Vernier scored the second try and Emilie Boulard the third, giving France a 19-0 lead over 11th-ranked South Africa in better than even time. Vernier scored off a neat chip kick by first-five Caroline Drouin and Boulard went almost the length of the field from an intercept.

The score remained 19-0 at halftime as South Africa's performance was lifted by a strong scrum. That revival continued when South African winger Nomawethu Mabenge scored the first try of the second half.

France had become sluggish and had to find a new gear. That they did so efficiently again was impressive — Sansus scored her second try in the 68th minute, attacking quickly from a tapped penalty.

Player of the match Sansus said after the game: "We got the points, that's the main thing. We played against a big South African team that was very strong. I think of girls like Romane and Madou who managed to compete. We were lucky to have them because physically they were very tough, they attacked us, they hurt us. So yes, it's a good performance because we won but I think that the content is still not satisfying."

Captain Celine Ferer added: "We are very happy. We put in 40 points and we wanted to make a big start today. We told ourselves to do clean things, to play our game, and that's what we managed to do: make a big start and finish with a last try, so we're quite happy.. It's true that we made a great start. We made some small mistakes after, we were a bit behind. They get the better of us, we have a big team in front of us too. We're in a mythical stadium, maybe a little bit of pressure to be in a magnificent stadium like this and it's the first opening match so we'll have to let go.

"The South African team is a big one. So it's true that they dominated us quite a bit in terms of contact. We had to tackle them very low to be able to get them. They played a very good match. They played after the contacts. We expected that because we saw the videos. So there you have it, they fulfilled their mission and we fulfilled ours too. So that's what counts.

"We have to manage to play 80 minutes at a high level, quite simply. We have the right to have phases of hesitation, we have to manage to refocus and that's what we managed to do because we were able to make progress afterwards. So we have to keep a cool head and be clear-headed in our game."

South African coach Stanley Raubenheimer: "I am very happy with my team. From an effort point of view, we were measuring our effort. We knew what team we were playing. That first 20 minutes, if we’d done a little bit better there, who knows? Maybe a different result.

"The key thing was to keep ball. I think our f.irst phase did very well - our backs didn’t compliment that too well today. But overall I’m pleased with the effort of our team. This was our plan, really, to give it to France and show them that they had to play against us and I think our team did it well today.