The FFR have responded quickly and positively to claims of discrimination involving former international Assa Koita after her story broke internationally on social media this week. 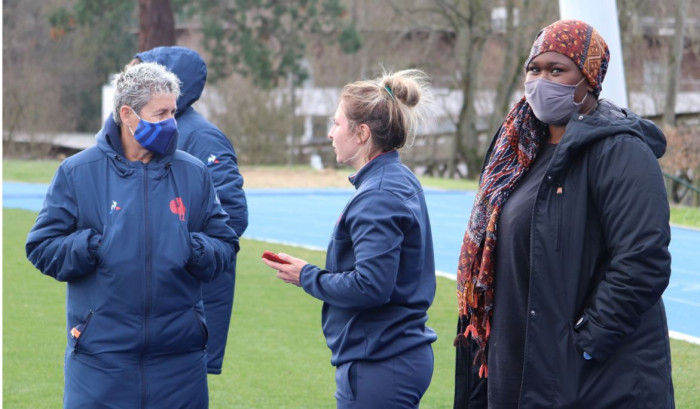 An interview with former French international Assa Koita on French sports network beIN Sports caused a social media sensation both inside and outside France at the start of this week when Koita claimed that she had been dropped from the French team because she wished to wear a hijab in matches. The story had first appeared in France in August when it was covered by Rugby au Feminin but only this week was it picked up internationally.

Religious head coverings have been a particular issue in constitutionally secular France – it was one of the first countries to ban some forms of Muslim head covering.

Assa told beIN Sports that she had now faced any problems at club level. “I remember when I was with my coach at Honfleur I said “Hey, I’m wearing a hijab” – I didn’t want to be a bother, I said it while I was laughing. He saud “You’re still playing though, right?” and I said “Yeah, yeah!” and he said, “Well, I don’t care! Go for it. Now get changed.”

"So I kept training and it was never an issue in matches. I always wore a scrumcap anyway, so nobody would have noticed.

"Stade Francais contacted me – it was never an issue with teammates or coaches.”

However her experience with the French Federation was, apparently, different.

“I got phone calls from certain people in the Federation saying “Hey, I heard you’re wearing a hijab, is everything okay”, and “You can come to selection camp, you can put a scrumcap over the headscarf, that way nobody has to know about it” and, well, I was getting phone calls all the time, but I wasn’t getting invited to the training sessions. I thought to myself “Okay, it’s over. They’re not going to call me anymore, I think this is causing the problem”. They never came out and said it, but I knew that’s what it was.”

She therefore withdrew from selection asked the FFR to stop calling.

“They don’t really understand the religion, unfortunately there is prejudice, and I think they’re closed off in their bubble.”

Hayraud acknowledged, that she had expressed comments about the wearing of the veil and religion in general, but said that these comments had not influenced the selection process. She and Koita met to discuss the issue after which they agreed that the matter was now closed.

However, in order to ensure that this kind of situation does not happen again the FFR has taken action. In a release today the Federation has said:

“Our institution will work with Assa who wants to make progress for the future of French rugby, like us. Assa agreed, on the proposal of Vice-President Serge Simon, to carry out work within the framework of the Federal Commission to Combat Discrimination. She will contribute her valuable support by sharing her career as a woman, a player and an educator.

“The French Rugby Federation is proud to have players of all origins and religions in the image of our great nation. This diversity that underpins the wealth of our country. The FFR promotes the values of the Republic on a daily basis, with strict respect for the fundamental principle of Secularism. Much remains to be done and rugby will continue to play the role of a sport that promotes tolerance, fraternity, respect and solidarity.”

"I am delighted to have met Assa Koita, whose statements have enabled us to question, and allow us to work, on this subject. It was our duty to listen to her and to support her. The exchange with Annick clarified the situation. Her testimony, her direct and sincere character, her convictions, will allow the Federation to strengthen its actions and raise awareness of tolerance and respect for others. All players who are victims or feel discriminated against will always find listening and support from their federation. Assa's commitment is a great opportunity to strengthen our values and grow.”

Thank you to our colleagues at Rugby au Feminin who pointed out that this controversy had been rumbling around in France for some months. The above article has been amended accordingly.