Scotland confounded all expectations to draw 13-13 with France at Scotstoun this afternoon to give England the 2020 SIx Nations. 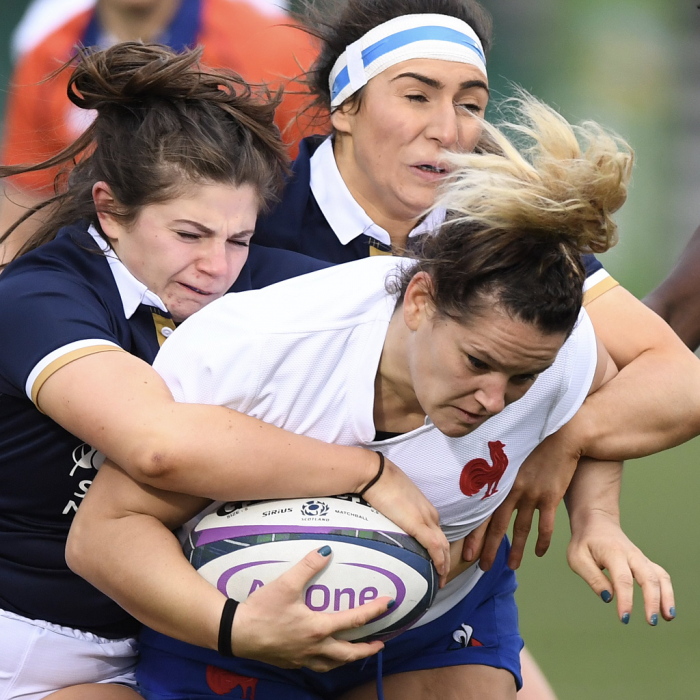 Scotland were confident, determined and battled hard all the way – but ultimately France can only look to themselves as they failed to win against Scotland for the first time since 2010.

For a team with World Cup ambitions to fail to beat (at the start of play) the 11th ranked team in the world was poor, and ultimately self-inflicted.

France had all the advantages coming into this game. They had their entire 15s and 7s squads to pick from (only two first-choice players were unavailable), and the whole squad had had two months of playing experience in domestic Elite 1. Add in a decade of big wins – by an average 40 points per game – and it seemed they only needed to turn-up, on paper anyway.

The team management signalled that confidence by selecting their least experienced starting line-up possible from the squad, and all pre-game talk was about their games against England in three weeks’ time.

What they seemed to forget about was Scotland, for whom this was a key game in their preparations for the World Cup qualifiers.

That over confidence seemed to feed into a French team that never switched on, until perhaps the final stages when their backs were against the wall.

Their passing and handling was poor from the start, but that did not seem to matter as their first try after five minutes came from their own handling error. A Scottish scrum as a result of a French knock-on was overturned by the powerful French pack, resulting in a penalty, a lineout on 5m, a drive and a Safi N’Diaye try. The conversion was missed, but France were 5-0 up and the game barely begun.

Confirming their pre-conceptions for the game it was, in a way, the worst start France could have had as misdirected passes and knock-ons began to mount. But midway through the half and an exchange of penalties and France were still only five points up. The tries would surely come – it only needed time, but frustration was now creeping in and at half time it was still Scotland 3, France 8.

Clearly words were exchanged at the break and France came out more determined and soon extended their lead to 13-3, a carbon copy of the opening truly except it was Agatha Sochat getting the touchdown.

And now came the fatal move, the unforgivable moment when overconfidence became recklessness  – and it came from the team management off their field.

With most of the second half to go, and a lead of just 10 points, France seemed to assume the game was over, and pulled off half their pack. Then, ten minutes later, they emptied the rest of their bench - with still 25 minutes to go.

It was understandable a desire to give as many players as much game time as possible – but this game was far from won. With more than a quarter of the game to go, and knock-ons already beyond double figures, the new pack was not dominating Scotland as much as the old one was, and all of their cards were now played.

Within three minutes that needless gamble failed as Lenaig Corson – who had been on the field for barely 10 minutes - limped off. France tried to sneak on an 9th replacement, but with as experienced a referee as Sara Cox that was never going to happen. They were down to 14 with 23 minutes to go.

Scotland could not believe their luck. They had been playing well and now raised their game with France holding on desperately. Ironically the French were now playing better than the had all game, but were up against it. Penalties began to mount and Nelson slotted one on 64 minutes and narrowly missed another a few minutes later. It was Scotland 6, France 13 – and into the final 10 minutes.

This was now breathless, edge of the seat, don’t look away, stuff and with six minutes to go that extra player finally told, Scotland throwing it wide to find Rachel Shankland on the overlap. A try in the corner and it was Scotland 11, France 13.

Up stepped Helen Nelson with a touchline chance, a blustery wind and possibly her most important kick ever. She hit it perfectly and the scores were tied.

Cue a final five minutes of end to end action, each team desperate for the winning score. Finally it was Scotland who decided that the draw was worth protecting and sent the ball into the stands.

In the end it's a famous result for Scotland – to say it was their best result for a decade would be no exaggeration. For France an object lesson for the World Cup – never underestimate the opposition, and play the team in front of you, and make sure you win that game before you start playing the next.

And for England, sitting at home watching the game, a Six Nations title, giftwrapped by their greatest rivals.