France provided Ireland with a reality check in Dublin, winning 56-15 – their second biggest win against Ireland, and the largest in the Six Nations. 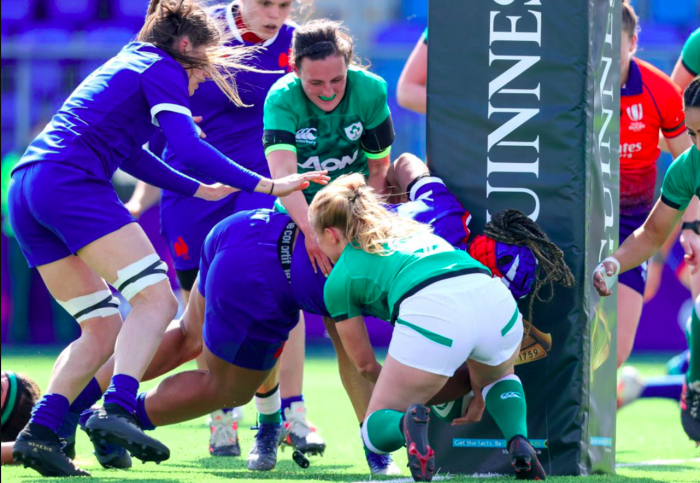 A match with so much anticipation surprised everyone – even French coach Annick Hayraud – with the size of the French win.

This was particularly so given the opening exchanges which were littered with French errors, literally from the kick-off. Ireland were gifted three points from a penalty under the posts and visions of past French performances came to mind.

But after 11 minutes the French finally managed a stable scrum, the ball found its way to Emile Boulard, who raced away to set up Caroline Boujard to score. Drouin converted a tricky kick and France were ahead.

That seemed to settle their nerves and from then on the French never looked back. The sheer speed of Boulard doubled the score on 18 minutes as she raced away from everyone to reach a ball that had been kicked ahead by Sansus, showing some quick thinking after turning over the Irish.

Ireland’s discipline against Wales had been a problem, but they had managed to get away with it. Against France they didn’t. Midway through the half a needless penalty was given away at a ruck, France kicked to the corner, won the line out, worked a maul over the line – and Aoife McDermott’s attempt to pull down the maul resulted in a penalty try. 21-3 to France.

There were some positives from Ireland, and from the restart they took advantage of a French error to set up their own maul, Cliodhna Moloney getting her hand on the ball to score.

But it was a score against the run of play. Drouin added a penalty for France on the half-hour, before three minutes later Safi N’Diaye proved unstoppable from close in and France had their bonus point score. With Cyrielle Banet breaking away to add a fifth try France went into the break leading 38-8.

Another impressive backrow move put in Boujard for her second try soon after the restart, before perhaps the try of the game – a team effort where most of the French team touched the ball ending with Marjorie Mayans touching down France’s seventh try. 48-8.

A second Irish yellow card – this time for a high tackle by Murphy Crowe – gave France a penalty before Cyrielle Banet added her second try in the 71st minute.

Emma Hooban scored a consolation try for Ireland from a maul shortly before the close, but a final score of 56-8 was France’s biggest win against Ireland in the Six Nations.