France too strong for England U20s

England Women U20 were defeated 7-17 by France Women U20 at Esher RFC on Saturday. 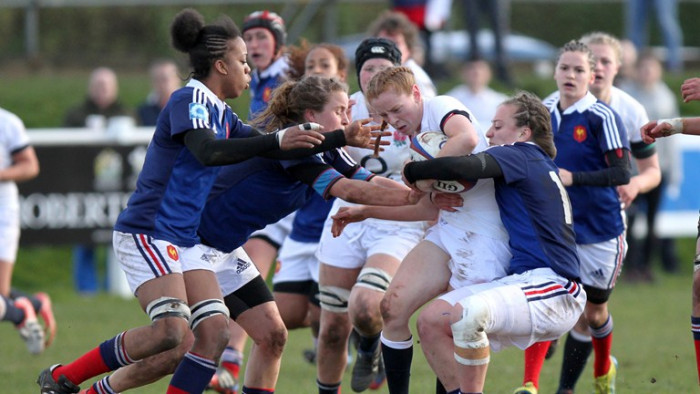 England’s points came from a first-half try from No. 8 Zoe Aldcroft, following up her player-of-the-match performance against Army Women last week, which was converted by Zoe Harrison.

They took the lead after 17 minutes when Lecat barged her way over the line and extended their advantage soon after when Vinacua crossed in the left corner.

However, England responded seven minutes before half-time when they turned over a scrum on the opposition’s five-metre line and Aldcroft pounced to score. Harrison added the extras to close the gap to five points at the break.

The match entered a tense period in the second half but the away side moved further ahead on the hour mark. England full back Catriona McNaney made a brave tackle to prevent outside centre Ian Jason from scoring, but the ball was recycled and Torres Duxan dived over out wide to seal victory for France.

England Women U20 head coach Jo Yapp said: “The scoreline probably didn’t reflect the game overall but France took their opportunities and we didn’t. Unfortunately we weren’t clinical enough on the day.

“Part of our programme is to see whether the players can pick themselves up from these sort of defeats so it will be a real test of their character.

“They did fight hard today and we can’t fault their effort but there are certain parts of our game plan that we really need to have a look at. We’ll learn an awful lot from this experience.”