France too strong for Ireland

France were too good for Ireland, winning 24-0 and taking a bonus point score from this opening match.  This was Ireland's worst defeat to France and first time they have failed to score against France since 2006. 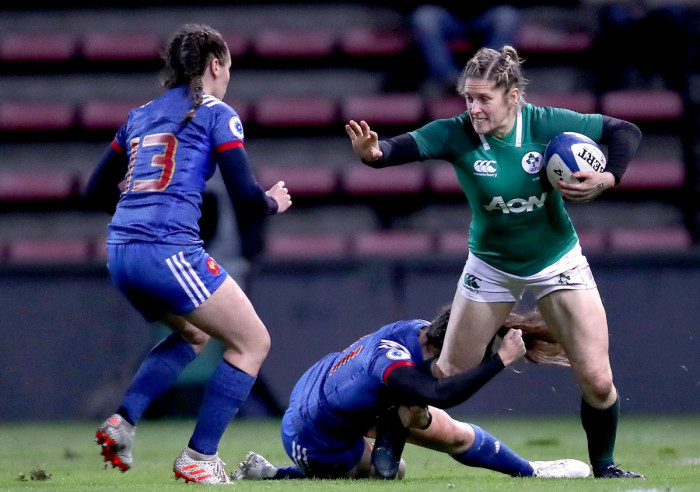 The inexperience within the Irish squad showed over the 80 minutes, with some poor defensive errors handing far too much easy yards to the French throughout.
But Ireland will take some solace from an improved second half performance, when it looked at times like the French were going to run away with it after racing to a 17-0 lead.
Jessy Trémoulière helped France to a promising start with a burst down the wing and it took a Lindsay Peat try saving tackle to keep the score sheet empty after just a minute.
It was all France though and some neat passing across the backline saw Cyrielle Banet finish in the corner for the opening score.
Ireland woke up and defended valiantly in the coming minutes with Cliodhna Moloney and Niamh Briggs prominent in harrying the French attack. When Ireland did get time on the ball they improved with every carry, with Moloney and Clare Molloy making hard yards up front and Briggs varying things with her boot.
Ireland had chances in the French 22 and were a metre out but lost the ball through a brilliant turnover by Romane Menager and France broke away to score down the other end. A superb kick from Pauline Bourdon found Caroline Boujard  and Jade Le Pesq was on hand to finish .
Trémoulière was over next after half an hour after another searing break through the middle - this time through Yanna Rivoalen, though there were a number of players involved. That took it out to 17-0 and it already looked a long evening for Ireland.
But France failed to fire in the second half with a combination of better Irish defence and poor accuracy from the hosts combining to make it a frustrating 40 minutes, where neither side could make much of a breakthrough.
Bourdon had moments of magic  but France scuppered a raft of chances as they attempted to go for the bonus point score.
It was Ireland on the 70th minute who looked most like breaking the deadlock with a fine run from Megan Williams down the right wing but the great chance ended with a knock on on the other side of the field. From the scrum Banet raced 70 metres, past some poor defending from Ireland. It took a last ditch tackle to stop her, but a score was coming.
France did score minutes later when a lovely offload from Audrey Forlani helped Le Pesq over for her second with Trémoulière again heavily involved.