France won the first leg of the European Grand Prix last weekend and will be top seeds for the Olympic qualifier on 13/14 July in Kazan. 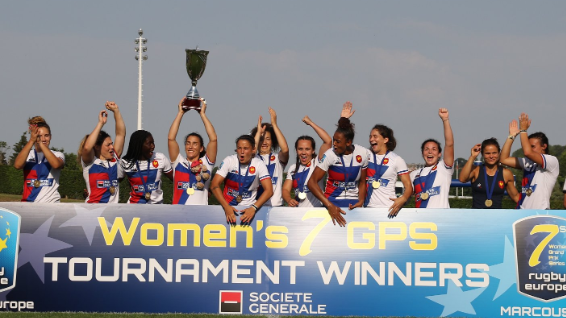 The five World Series teams dominated the opening day. France swept through Pool B, conceding just one try - against Wales - while scoring 18 of their own. Russia and England were similarly untroubled in Pool A, Russia beating England in the decisive fixture, Only in Pool C did a team from outside the Series trouble any WSWS teams, Scotland only losing to Spain by a single score, and to Ireland by two. Ireland topped the pool.

The pattern continued on Day Two in the quarterfinals, with the Russian and French keeping clean-sheets against the Scotland and Poland (third best at the end of the group phase), while Spain won easily against the Belgium. The only all World Series match-up saw Ireland dominate its English neighbour (24-19) to join the final four.

Spain were up against reigning European Champions Russia in the first semi-final, who left them pointless (26-0) to reach a new final.

The other semi-final was much closer between France and Ireland. In an encounter where the defences countered the respective attacks, France managed to reverse an unfavorable situation by scoring the decisive try between the posts (14-12).

In a replay of previous finals, the French and Russians me to decide the title and top seed for the Olympic Qualifier. A tense match saw the teams who deadlocked for almost the whole first half before Anne-Cécile Ciofani managed to score the only try of half (5-0). Faster than their opponents, les Bleues took control of the match by crossing the line a second time with Carla Neisen (9th minute - 10-0). Faced with a strong defense, David Courteix players continued to control the game resulting in a new try by Fanny Horta (13th minute - 15-0). The Russians saved their honour thanks to Daria Noritsina , but too late to change the outcome.

The outcome of the opening leg decided the seedings for Kazan Olympic Qualifier where the winner will go to Tokyo, while the second and third will play in the World Repechage tournament

Although Belgium and the Netherlands qualifed for the tournament, they have withdrawn. Scotland and Wales do not take part as England wil be competing to win Great Britain a place at the Games. This resulted in four paces being allocated to the European Trophy, which should have included Finland but they have also withdrawn passing their place to fifth-placed Sweden.

Overall therefore seven countries from the Grands Prix qualified: France, Russia, Spain, Ireland, England, Poland, Italy. Four countries from the Trophies Series (in Budapest and Lisbon): Germany, Romania, Czechia and Sweden join them, along with the winner of the Conference (in Zagreb), Moldova

The tournament will take place on 13th-14th at Central Stadium in Kazan. With none of the WSWS teams being seriously challenged in Marcoussis (apart from by Scotland, who will not be in Kazan) the tournament looks like a straight fight between the five teams. France should have a straightforward run to last four, while the games between England and Russia, and Spain and Ireland, are likely be key to deciding who will join them.