France U20s run goes on and on

France U20s run against England has now reached 13 games unbeaten games since 2012. For a series between two such ostensibly well-matched (and regularly changing) teams to have become so one-sided in it outcomes is astonishing. 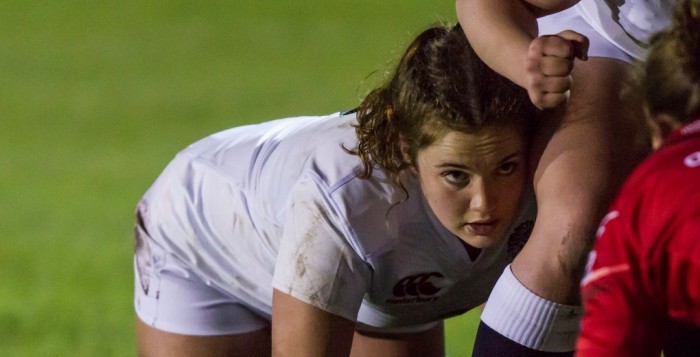 All the more so because – as has so often been the case since 2012 – the result yesterday evening (17th March) was close, and for the first hour could easily have gone the either way. The margin of victory fails to reflect the even nature of the game

As usual a big, vocal crowd of a size and noise that most of the England team will never have experienced before (unless they played in France last year) greeted them at Stade Guy Boniface, Mont-de-Marsan.

Despite that, England began well. The power and aggression of their pack dominated up front and after 19 minutes they deservedly went ahead with captain Poppy Leitch trundling over the line off the back of a catch and drive.

The elusive win looked really possible. The French were shaken by England’s start and, though they soon pulled three points back with an Andrea Marcial penalty, England looked the stronger side.

Then, just before halftime, came the crucial moment. Some great England defence had kept France out, and had won them a turnover. With everything under control and routine clearance kick from Zoe Harrison would clear the lines.

But France – and especially centre Mathilde Coutouly – had other ideas, exploding forward to charge Harrison’s kick down and then dive on the loose ball for a brilliant individual try.

Yet England were not downhearted, and within six minutes of the restart were ahead again. A well controlled maul starting on the French 22 took them to within 5m of the line, setting up a base from which Wasps hooker Hannah West was eventually able to cross from short range. With Harrison’s conversion England were 12-8 ahead.

Unfortunately, that was also destined to be England’s last serious incursion in to the French half. On a perfect evening for attacking rugby, and with an increasingly excited crowd behind them, France started to throw the ball around. A tiring England team defended heroically but was increasingly stretched by the speed and relentless waves of French attacks, and could find no way to break out.

Andrea Marcial put France back into the lead on 54 minutes as she powered over after a break from Gabrielle Vernier, but missed her own conversion. Lindsey Thimon then showed great strength to put France further ahead on the hour before Ian Jason powered through several tackles to touch down under the posts from the final play of the game.

"I cannot fault the effort from the players tonight. There were some definite improvements from the previous match, especially with our set piece," said coach Jo Yapp. "Unfortunately, we were unable to sustain the pressure through field position to create opportunities to score at key moments in the game.

"The girls are gutted with the result but this is a development programme and they will learn a lot from this experience."

For the French, the relief of not being the team to end this run was palpable – and that pressure carries on to next year’s team.

Complete video of the game