Attention on the four team series in England and Ireland will be distracted a little next week as France take on the United States in a two-test series. 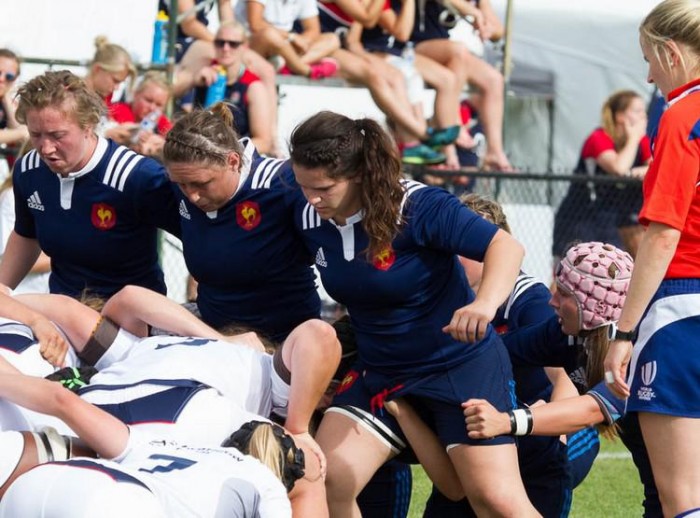 France are currently ranked fourth, and the United States seventh - but with less than six ranking points between them the statistics at least suggest that this could be a close series.

France have already named two separate teams for the two tests. 31 players are named in total, including 13 players who did not play against England in the first Autumn test. Of those who did play at The Stoop, only Carla Neisen, Camille Grassineau and Rose Thomas fail to return as they instead prepare for the sevens in Dubai.

A now-fit Marjorie Mayans has also been selected for the opening round of the World Series, along with players such as Caroline Boujard, Fanny Horta and Laürelin Fourcade, all of whom are likely to be in contention for Six Nations and World Cup places. Jade le Pesq, who was in the England party but was injured just before the test is also still out.

Elodie Poublan, one of the big names missing from The Stoop, returns for both tests as does young Bayonnais scrum-half Pauline Bourdon, who made such an impression against England in the Six Nations, though she will probably start on the bench for the first game for which the experienced Yanna Rivoalen has also been selected. Bourdon’s club team-mate Lauriane Lissar, who was reserve with the sevens in Rio, also gets a chance at fifteens.

The other notable addition to the French squad, who may prove a challenge to commentators for the series, is Romane Menager’s twin sister Marine, who gets her first cap. For reference, Romane has the ponytail. Apparently, even their mother cannot tell them apart otherwise. Marine is also expected to play at centre, while Romane should feature in the back row.

Results are clearly not the over-riding concern for coaches Jean-Michel Gonzalez and Philippe Laurent, who are giving everyone in the squad a chance to show what they can do. Over France’s three games only eight players (six of whom are forwards) – Arricastre, Carricaburu, Deshayes, Guiglion, Le Duff, Menager (R), Mignot and N’Diaye – will have appeared in all three tests, suggesting that they may be the core around which France’s World Cup team will be built.

The United States, who have been sponsored by the tour by Atavus, are coached by Peter Baggetta for the tour as Head Coach Pete Steinberg is on personal leave for the tour.

"The pressure's going to be on all of the coaches and all of the players to perform," Baggetta said. "The pressure to perform is going to be magnified by the fact we have to play fourth-ranked France in France. The expectation is we're going over there to compete and to perform. If we don't perform, we'll have to look at what we have to do, what changes we need to make going forward into 2017."

Six of the 2014 World Cup team return to France, including Kate Daley, who captained team in that tournament, and Katy Augustyn, Sylvia Braaten, Hope Rogers, and Kimber Rozier, who all played against France in last summer’s Super Series.

Rogers was one of the youngest players at the World Cup, and she and World Cup reserve Sam Pankey were named as part of the USA’s first  XVs Residency Programme earlier this year along with 2016  Premier League “Most Valuable Player” Jordan Gray.

In addition, Kimber Rozier and Jess Wooden spent time with Aylesford Ladies earlier this year, and overall nearly half of the team been training full-time with either National Development Academy or the Sevens.

"The key thing for us this tour is going to be competition," Baggetta said. "We want players to compete; play against themselves, play against the player they were yesterday, and competing against each other at their positions. In France, we're going to find out who can compete and who struggles to compete.

"That drove some of our selections decisions, too. If you're not playing any rugby and show up to play against France - in France, which is one of the most difficult places to play to begin with - it's hard to be prepared for the type of physicality and that type of onslaught."

Joanne Fa'avesi and Alev Kelter, fresh from the Rio 2016 Olympics, are in line for test debuts along with U20 graduates Abby Gustaitis, Rebekah Hebdon, and Kate Zackary.

"One of the lessons we learned from the previous cycle was chopping and changing players constantly - and that lack of stability - hurt us a bit," Baggetta said. "We made a conscious decision to get our athletes playing as much together as much as possible. That doesn't mean there won't be players that force themselves onto the squad, but we're going to be pretty consistent going forward.

"If you don't have continuity, you have this massive turnover and either you have a lot of new players coming in or you can't bring in as many new players. The other nice thing about the setup now is the close relationship the 15s program shares with Richie Walker and the sevens program. Richie's input was really valuable to us, understanding who could transition to 15s and in a short time frame."

Games will be on France 4 in France, and the Rugby Channel in the USA.