France U20s beat England for the second time this season on Friday with a 15-3 win in Dijon. 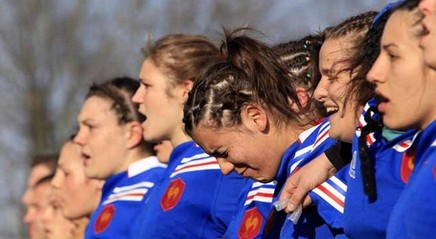 After a 17-5 loss to Les Bleus last month at Esher RFC, the England U20s had hoped to bounce back but they were left disappointed and ruing errors and missed opportunities.

England started the match well, taking the game immediately to France. The home side were under pressure from the first whistle with some good early possession by the visitors and Bristol wing Mary-Ann Gittings went close. She was held up on the try line after a lovely interception from skipper and fly-half Megan Goddard.

But the tables soon turned on England as France muscled their way back into the game and into control. A good period of pressure led to a well worked chip ahead landing nicely for France wing Aissetou Diallo who touched down with ease. Fly-half Camille Imart couldn’t convert but France still led 5-0 after 19 minutes.

France continued to dominate possession and territory but England’s defence was impressive and it held firm until the 38th minute. England paid the price for a poor kick in the midfield and then couldn’t scramble back their defence and consequently missed three tackles to allow fullback Caroline Boujard to score. Again, Imart didn’t convert leaving France 10-0 ahead at half-time.

A 54th minute penalty for fly-half Goddard for an infringement in the midfield by France put some points on the board for England, and some fresh legs in the form of Siobhan London-Hughes, Courtney Gill and Amy Needham helped revitalise England.

The changes, however, weren’t enough to take on the French forwards who were gathering momentum in the second-half and although England’s defence held strong for some time, in the end a line-out and a powerful driving maul from the hosts saw hooker Wendy Divoux power over on 61 minutes.

France missed the conversion once again, but for England, although they didn’t lack passion, they couldn’t pull back the deficit. Both England and France continued to compete well at the breakdown but mistakes by the visitors forced them to keep having to defend hard to keep France at bay.

England coach Amanda Bennett said: “I am obviously very disappointed but I think at times we played well enough to win the game. Our work rate was good and we worked hard in defence but in the end we gave away too many penalties and we didn’t make the most of what opportunities we had. France were powerful and were able to push down the line at us and drive from line-outs.

“We’ll learn a lot from these two games though and we will use this experience to help us prepare for the Nations Cup this summer. That will be a very exciting competition where we will face some very different opposition in the form of Canada, the USA and South Africa.”

Substitutions: Longdon-Hughes for Molesworth (HT), Gill for Hall, Evans for Needham (both 46), Aylesbury for Notman, Roberts for Peedle (60), F Williams for Goddard (63), Pugh for Prescott, C Williams for A Scott (both 70).