France put in a truly awe-inspiring performance to win the final of the second leg of the FIRA Women’s European Sevens Grand Prix in Brive, but it was still Russia who lifted the European title for the second year running. 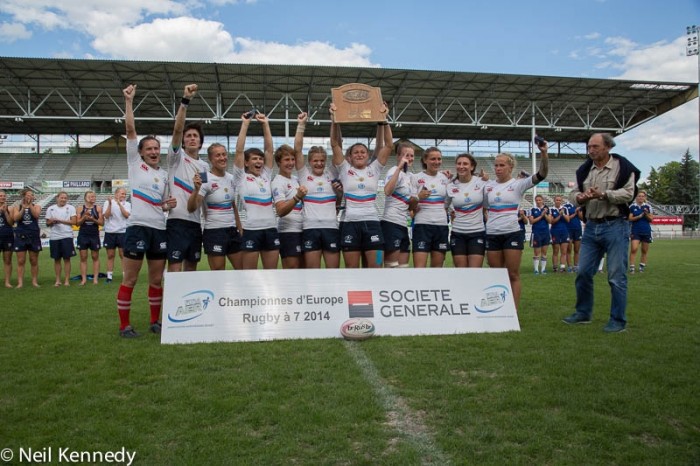 Russia lift the European Championship... without winning a tournament!
(with thanks to FIRA and Neil Kennedy)

Playing sevens like we’ve never seen them before, France came back from 12-0 down to take Russia apart in second half of the final of the European “Top 12” Sevens in Brive, giving us a faultless display of rugby that deservedly won them the tournament in front of their home crowd. However, it was not enough to stop Russia winning the overall European championship title, based on performances at both Brive and Moscow last weekend.

For most of the first day, the Brive leg looked like it would go by with barely a ripple. The first two rounds of games went perfectly to form and seeding, and by the time we reached the third round of games six of the eight quarter-final places were already decided.

Six teams were left competing for those final places, and with minds suitably concentrated we had some tense games as each team knew that had to not only win, but score as many points as possible. After the dust settled less than a single converted try separated Germany, Italy and Belgium – but it was Belgium who missed out on that crucial final place in the last eight, despite beating Ireland 12-5 in their final game.

That was not the end of the day’s excitement, however, as France now took on England and, to the home crowd’s delight, beat them 17-7, after which Spain, playing far better than in recent tournaments, pushed Russia all the way in a tight game, going down only 7-0.

Day two began as with day one. The first three quarter-finals went to the higher ranked team by a comfortable margin, but the final match bought us the next chapter in European Sevens’ oldest (but most one-sided) rivalry. England and Spain – two nations who have dominated sevens on the continent for the past decade or more. One or other have finished in the top two every year, yet despite this Spain had never actually beaten England in a head-to-head clash.

But this - at last – was Spain’s day. A classic game that went one way, and then then other, was only finally decided by a wonderfully worked team try ending under England’s posts. 19-14 was the final score, as Spain celebrated. The semi-final was now almost overshadowed as a result, with Spain losing heavily to Russia while in the other game in the final four France gave notice of what was to come by beating Netherlands comfortably 26-0.

Attention now moved from the top to the bottom, with the Bowl tournament deciding who would be relegated to Division A. Wales almost wrapped it up in the semi-final when a 24-0 win over Ireland would have been enough to confirm their place in the top 12 without needing to worry about the final itself. But the conversion of the fourth try was missed, the whistle went, and an all-or-nothing head-to-head with Belgium would decide everything. The first half was tense, but it was the Belgians who seemed most affected. A dropped pass in front of their own posts cost them the first try, and mistake repeated barely a minute later. Although they pulled a score back, they were now chasing the game and Wales ran away with it in the second period 38-7.

With Sweden also being relegated, the two teams promoted from Division A in 2013 were immediately relegated – while the two teams relegated last year (Scotland and the Ukraine) will replace them.  It is an outcome that demonstrates more than anything else the gulf that now exists being the top 10 or so teams in Europe, and the rest.

Having wished the not untalented Belgian team au revoir until 2016 (as it is hard to see them failing to win Division A next year by a comfortable margin), the tournament settled down a little. England recovered from their quarter-final defeat to win the plate against the surprise team of the past two weekends, Portugal – almost certainly (on this evidence) the best team to have never played in the Women’s Sevens World Series. It’s a pity that we will probably not hear anything from them again until the European Championships in a year’s time.

Netherlands again took third place in a close 19-10 win against Spain, but now we came to the final.

Russia took and early lead, which they quickly doubled. 12-0 was the score as the first half drew to a close – but them everything changed. A well taken try was lifted by a superb touchline conversion from Fanny Horta, following on from an inch perfect kick to touch that had first broken the Russian stranglehold on the game, sending play into the Russian 22 where it would stay for most of the final 12 minutes or so of the game.

12-7 at half time became 12-12 early in the second half thanks to a well taken try from Caroline Ladagnous before a scintillating run from Marjorie Mayans took Russia apart and gave the home side the lead. France were now playing glorious sevens, and a fourth try was inevitable. It came from what was to be the final play. The kick was missed this time, but France had won a memorable game 24-12.

But while France took the Brive title, Russia - despite failing to win either leg of the competition – still took the overall title thanks to their two runners-up finishes. France, England and Netherlands tied on tournament points for second, but France sneaked the overall runners-up position from England (3rd) and Netherlands (4th) on overall points difference. More importantly both France and Netherlands now automatically qualify for the IRB’s WSWS promotion tournament in September, where four new teams will join the seven existing core teams for the 2014/15 WSWS series.