France, hosts of the third European U18 sevens championship, lifted the trophy - despite having not taken part in the previous two tournaments. 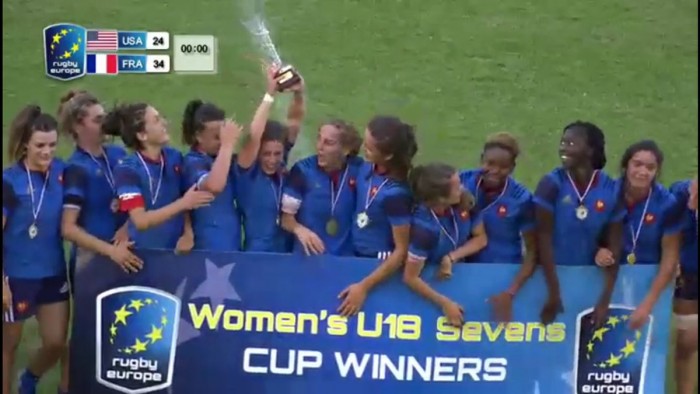 The 2016 European U18 Sevens broke new ground before it started, with not only France taking part for the first time, but also Canada and the United States. What is more China and Japan had been originally included, which would have made the tournament a near World Cup, but they withdrew in the weeks before the competition, being replaced by Andorra and local French club team (and, at adult level, national runners-up) Romagnat.

The reason for this sudden expansion of interest is, needless to say perhaps, the Olympics – in this case the 2018 Youth Olympics in Buenos Aires. That will, for the second time, include women’s sevens (Australia won in 2014).

Only six countries will take part, with each continental federation putting forward their champion team*. In 2014 placings in the adult Sevens World Cup decided who these would be, but for 2018 it is expected that federations will run qualifiers in 2017. Hence France’s (typically) last minute interest, and also the USA and Canada who were using the event as a warm-up for a possible Rugby Americas North qualifier next year.

The fact that Asia already have an U18 tournament (won this year by Thailand) may explain Japan and China’s no-shows, although they did not play in their own home tournaments either. No official explanation about either absence has been issued.

Coming to Vichy this year, England started as overwhelming favourites. Winners on 2014 without conceding a point, they were almost equally dominant in 2015, conceding five tries over the weekend while scoring 38. With the UK School Games as a perfect warm-up before the tournament, and the wealth of talent at this age group – especially compared to most European nations, were players often do not start playing before university there cannot be many better prepared teams.

And England lived up to their billing on Day One, cantering to a pool win with 18 tries in three games, only allowing pool runners-up Italy onto the scoreboard.

Elsewhere in the tournament the new teams – Andorra, France, Canada and the United States – with no previous tournament record were given low seedings. This resulted in some comment even before the event, but it’s quite hard to see what else Rugby Europe could do, not least as previous tournaments had amply demonstrated that results at adult level are a poor guide to U18s.

Andorra’s ranking was about right, Spain and Wales winning Pool B ahead of them and Sweden – very much the expected outcome. However, the other three teams were clearly the best in their pools, which was tough on Portugal and the Netherlands who were probably strong enough for a quarter-final place (based on day two evidence at least), but finished third and fourth in Pool D behind lower seeded France and Canada. France won the group with an amazing demolition of Canada in what had expected to be a close game – a hint of things to come.

The United States – lowest ranked team - also won Pool C with ease, getting better and better as the day went on. Ireland were also comfortable in second place.

And so Day Two and the quarter-finals. England were expected to move towards an inevitable final, but they drew Canada. After their thumping by France this hardly seemed a major problem, especially as England had beaten Canada comfortably at fifteens in both this age group and U20s over the summer.

However, Canada had clearly not read the script, and at half-time lead by 24-7. England battled back in the second half, but the Canadians held on to record a shock 29-21 win.

The other quarter-finals went to form. The United States and France were too strong for Wales and Italy, and Spain’s first half against Ireland gave them an advantage that the Irish could not pull back.

The United States versus Canada is always a classic, and their semi-final proved to be no exception. Canada held a two tries to one advantage at half time, but that was exactly reversed in the second period with the crucial difference that the US slotted one more conversion.

France and Spain are similarly old rivals, but their semi-final was not as close. With the French looking a class act, the Spanish were bowled over 38-10, six ties to two.

And then the final. Should be close? Not on the evidence of the first half where France ran riot, with six unanswered tries and a 38-0 advantage. The United States fought back well in the second half, but never seriously looked like overhauling the home team.

Elsewhere, Canada took third and England – after that shock quarter-final – showed their true colours by scoring 92 points in their two Plate games. Portugal took the Bowl from the Dutch, and Germany the Shield.

*Actually it’s not quite as easy as that. A nation can also only enter one team sport at the Youth Olympics, so if they qualify for two or more of the team sports (handball, rugby sevens, football and hockey) they have to choose (for some reason basketball is not included in this list of team sports). As an example, in 2014, South Africa qualified for sevens and football, and opted for the latter, Tunisia taking their place in sevens as the next best African team in 2013.