It was hardly a classic game in Colwyn Bay, but France did more than enough to record their biggest ever win in Wales, and with it their fifth Grand Slam 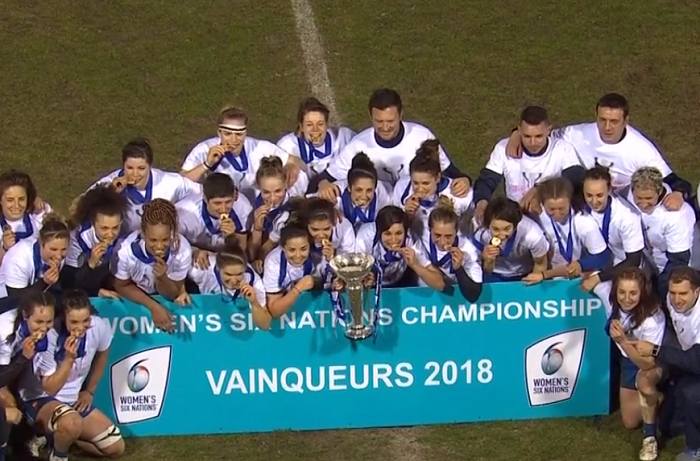 Wales began slowly and nervously - France threatened to run riot. Poor tackling first allowed Cyrielle Banet to run from near halfway through the middle of a disordered Welsh defence. Tackled just short she unloaded to Pauline Bourdon and France were on the board.

Minutes later a poor Welsh pass allowed Carline Boujard to kick ahead, Wales only saved by the bounce of the ball not favouring the French centre. But France were back inside the Welsh 22, and a few minutes later Caroline Drouin ran through a gap in the Welsh line that should not have been there to double the lead. 14-0 after 12 minutes.

But it was far from a one-sided game. Up front it was very even, and Wales now began to take advantage of the strength of their forwards, using the maul very effectively, going through long phases of play that kept them in the French half for most of the rest of the first period – but with only a penalty to show for it.

Nonetheless as the half drew to a close it looked like Wales might claw their way back into the game before a third French try in the final minute, the French forwards sucking in Welsh defence, developing a massive overlap to the right, and a try for Jessy Trémoulière. France lead 19-3 at halftime.

An even opening 10 minutes ended with a penalty try to France, A short pass from Bourdon created space for Boujard, who kicked ahead and seemed to be winning the race to the ball until she was pulled back by Jaz Joyce. With Joyce off the field, came a fifth French try, Wales defended a French maul well, but Agathe Sochat rolled off the back and crashed through to go 30 points clear.

Into the final quarter, a sixth try for France came after a long period of Welsh possession. After finally turning over, the French raced forward, a great backline move ending in a try for Carla Neisen. 38-3 to France.

Wales kept on the attack to the end, trying to use their pack to smash through the French defence – but the French held firm, and it was appropriate that it was their player of the tournament, Jessy Trémoulière, who kicked the ball into the crowd to win the game, the tournament, and a fifth Grand Slam.