French 6 Nations bid back on track

There was a big score for France to settle after their defeat last Saturday in the Italian mud and rain of Rovato, and the visit of Wales to Laon on Friday evening, only six days later, was an ideal chance to put things right and they did so with a 32-0 win. 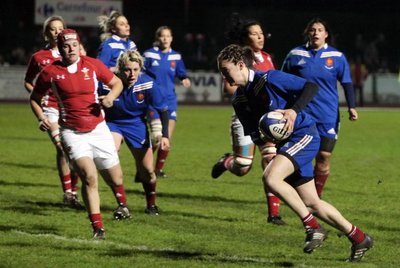 There were concerns that conditions might be the same, but the heavy rain failed to materialise and, despite being a bit chilly, the pitch was good.

With a near capacity crowd of over 2,000 spectators behind them this time, it was a perfect chance for France to relaunch their campaign,

Jessy Tremouliere (pictured above), normally a full-back but promoted to fly-half following the loss of Aurelie Bailon, had looked nervous and out of sorts against Italy - her distribution slow and her runs being repeatedly snuffed out.

Against Wales it was a different matter. In the opening stages the 20-year old seemed to score almost every time she touched the ball. A penalty after three minutes was followed by a try - which she converted herself - only five minutes later. Ten minutes after that Tremouliere had her second try (which she also converted), followed by a second penalty a few minutes later.

At halftime it was 20-0, with Tremouliere scoring all of the points.

With Tremouliere going off early as France made some changes,  the home side seemed less fluid and enterprising and small mistakes started to creep into the game.

However, on 56 minutes Ladagnous sidestepped through the Welsh line to score France's third try, and then forward pressure allowed fellow prop Laetitia Salles to score just before the end.

But Wales were not finished. A break along the wing by Delyth Davies almost broke through near the end, but a great tackle from Elodie Guiglion ensured that France maintained a clean sheet.

France are back on track, but they still not fully satisfied with their performance. Hooker Gaëlle Mignot said:  "This victory is very satisfying. We to dig deep after last week if we were to remain in tournament. We have not yet analysed everything yet and there is still room for improvement and even at 20-0 at halftime we did not relax. We knew we had to stay focused because a rugby match can switch quickly."