After a lengthy pool phase, the eight quarter-finalists for France’s domestic championship are now known. 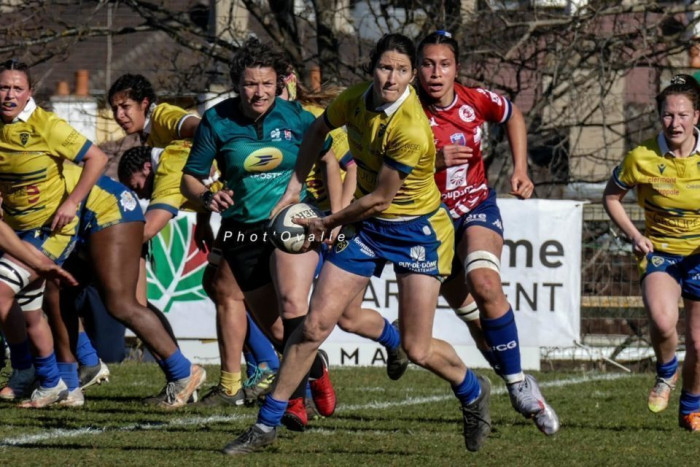 Qualification went down to the wire in the final weekend of the French “Elite 1” championship pool phase.

Several teams had wrapped up their place weeks – if not months – ago. Toulouse never looked in doubt, and ended with 100% record in Poule 1 and will be joined in the last eight by champions Romagnat, whose only defeats both came at the hands of Tourlouse.

In Poule 2 Blagnac, Bordeaux and Montpellier had also largely wrapped up their places before he Six Nations, though here the question of who would finish third and have to therefore play away in the knockout phase would not be decided until the final weekend.

But that left three teams (Grenoble, Rennes and Bobigny) fighting for two spots in Poule1, and Lyon and Chilly Mazarin in a straight shoot-out in Poule 2.

Rennes travelled to Paris to take on Stade Francais knowing they had to win and hope they results went their way elsewhere. And they did, winning 29-7 thus condemning Stade to bottom spot in he pool. A brace of tries from Yolaine Yengo in the first half put them on their way. Wing Valentine Lothoz added two of own either side of the break, Rennes were in total control.

But they still needed Grenoble to beat Bobigny if they were to take fourth place.

Grenoble themselves were all but safe even before they travelled to rivals Bobigny, and lead 15-8 at halftime thanks to two tries from hooker Linda Hafsa, but Bobigny came roaring back, scoring 10 points in the final four minutes to win the game 31-22 and a place in the last four, at the expense of Rennes

In Poule 2 it was a straight winner-takes-all between Chilly Mazarin and Lyon. And at halftime there was nothing between the teams at 8-8. But in the second half the difference was Chloe Jacquet who began by converting her own try before adding two penalties to put Lyon into the last eight by 21-8.

The quarter-finals on Sunday will therefore be: