French Elite 1: The story so far

With so much of France’s regional press now behind pay walls it is difficult to provide the level of coverage of France’s Elite 1 that Scrumqueens has done in the past, but with the league phase now the midway stage and at the start of a Christmas break, it is good opportunity to catch up with the competition. 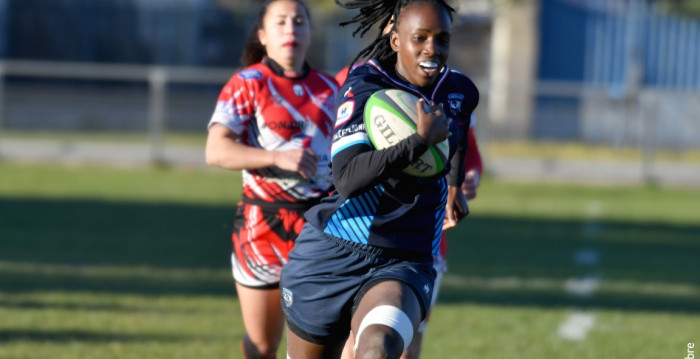 It is unfortunate that the biggest domestic story to come out of France in recent months should be the largely off-field story behind the collapse of AS Bayonne.

This is a club that in recent years has produced players such as Céline Ferrer, Pauline Bourdon, Camille Cabalou and Lauriane Lissar, but when Elite 1 returned after the autumn internationals it did so without Bayonne.

While the attention of most rugby writers followers had been on France’s wins against South Africa and New Zealand, the wheels were coming off at Bayonne in dramatic fashion.

With Elite 1 closed down for  few weeks the FFR organised a “French Cup” for the players not involved in internationals, and on Sunday, November 7 As Bayonne were due to play Tolouse.

But in an open letter, the club’s players refused to play the match – effectively going on strike – for several reasons.

First, the club lost most of its best players during the summer without any serious attempt to replace them. As a result more and more players were being drawn from the reserve team, resulting in numerous injuries - especially among the forwards – as they are lined up against highly trained athletes in opposition teams.

This was not helped by a glaring lack of resources compared to other clubs in the league as the club failed to invest in its top level women’s team. Players had been forced to go to neighbouring club Avrion Bayonnais in an attempt to find appropriate training facilities

The response of the club is reported to have been less than helpful, complaining that the demands of the players were the "whims of princesses" .

In a statement the players said that “playing with courage is no longer enough, the lack of investment of the Club inhibits the efforts made by us players". And that "by this refusal to play, we wish to sound the alarm. We are aware of our responsibilities as players and we are committed to the sport as we have always done."

The players’ stand won them support in the French rugby press and among players at other clubs, but the response from AS Bayonne was different. After a statement from the club president that was less than supportive, the Board of Directors met on 16th November and decided to forfeit all of their remaining games in Elite 1.

Returning to events on the field, unsurprisingly the two qualification pools are led by Toulouse and Montpellier.

In Poule 1 Toulouse’s defence has been extremely effective, conceding just 22 points in five games which have included a 44-5 win against champions Romagnat and 24-0 win against Bobigny last weekend. Captained by French captain Gaelle Hermet, and reinforced by the arrival of Pauline Bourdon, the team is packed with internationals including Camille Imart, Ian Jason, Maelle Filopon, Laure Sansus and Celine Ferer (incidentally another player who learnt her rugby at AS Bayonne).

With five wins from five Toulouse look odds-on for the quarter-finals, and despite their 44-5 loss Romagnat look likely to join them though they have only been able to get onto the field four times so far in six attempts, winning three.

The rest of the pool is wide open with current standing significantly affected by how many games a club has been able to play. However, Stade Francais are best placed to be able to break into the top 8 for the first time. With players such as captain Coumbe Diallo, Julie Annery and Lenaig Corson now on the team they lie third with three wins from five games. Of the “traditional” top 8 Bobogny will be most disappointed with their season so far, with just two wins in six.

In Poule 2 Montpellier lead, but their season has been far from the usual cakewalk. Indeed just before the autumn internationals they lost a game – something almost unheard of for the club at this stage in recent seasons – when they went down 24-20 at Bordeaux. Now captained by Safi N’Diaye, and with players such as Caroline Boujard, Cyrielle Banet, Romane Menager, Emeline Gros and Morgane Peyronet the 2019 champions struggled to fine form early in the season, not helped by injuries.

They nonetheless lie narrowly on top of the pool by two points from Bordeaux having played a game more. Bordeaux have won all six of the games against all of the other teams in the pool other than Blagnac despite a less illustrious squad than Montpellier – Madoussou Fall and Agathe Sochat being their leading names.

Blagnac are also well placed for a quarter-final place with five wins in six. With players such as Audrey Forlani, Marjorie Mayans, Audrey Abadie, Carla Neisen and Gabrielle Verneir their only loss with a 18-10 defeat at Montpellier in October. The rest of the pool is as wide open as Poule 1, with Lyon, Chilly Mazarin and Lille all with three wins from seven games.

The season restarts on 16th January.