France’s Elite league (“Top 16”) return after its Six Nations break, and as is often the case the long break resulted in at least one surprise result 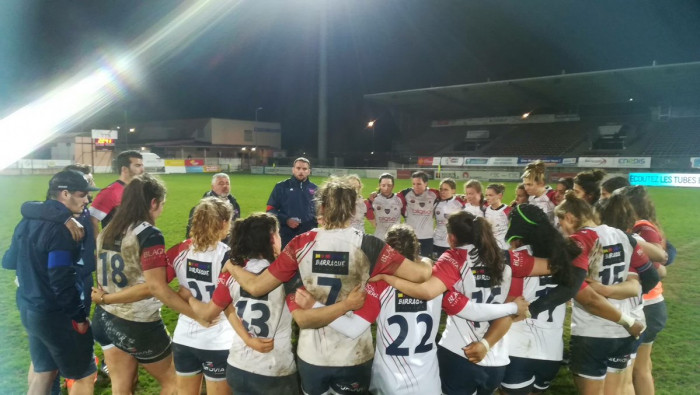 Stade Toulouse’s march to a second final at the top of Poule 2 in the Elite league stumbled unexpectedly at home to Bobigny on Sunday.

Eleven straight wins before the break for the Six Nations meant that Toulouse entered into the fixture with some confidence, and after the first half hour tries from Perrine Bienaimé and Léa Murie appeared to justify this giving the home side a 10-0 lead, but a penalty and a try for the visitors just before the break reduced that lead to just two points at halftime. That late try seems to have changed the complexion of the game completely as Bobigny dominated the second half with three unanswered tries and a penalty, emerging comfortably 27-10 winners.

FC Grenoble also recorded an extremely rare incidence of a win by one of this year’s promoted teams against one of last year’s Top 8 with a 15-10 win in Lille, but other games in the pool went with form with wins for Bayonne and Bordeaux against Tarbes and Caen.

Despite that defeat with three games to go Toulouse remain seven points clear at the top with 49 points over Bayonne in second, with Bobigny just five points behind in third. Some way behind Grenoble and Bordeaux are battling for fourth place.

Results in Poule 1 were rather more predictable, even if the results were a generally more restrained than before the break. Leaders and champions Montpellier made it 11 wins from 11 with a comfortable 29-3 win at home to Romagnat, and Stade Francais cemented their position as Poule 1’s top promoted team with a 25-11 win at home to Villelonguet.

Rennes recorded the biggest win of the day, 59-7 at home to Rouen, but the game of the day was at Blagnac where Tourlouse’s “other” team welcomed Lons.

The results was a classic game of two halves, with the home team going into the break with a four-try 22-0 lead – but deprived on Audrey Forlani through injury shortly before the whistle. Without Forlani Blagnac seemed a different team, and the visitors seized the initiative. Spurred on by great performances by Laetitia Grand and Manon Rey Lons swept back into the game with three converted tries, but Blagnac just managed to hold on to win 22-21.

As a result Montpellier remain seven points clear at the top on 54, with Blagnac in second 17 points ahead of Stade Francais in third. Stade, Rennes and Romagnat are separate by just three points in a battle for third and fourth.