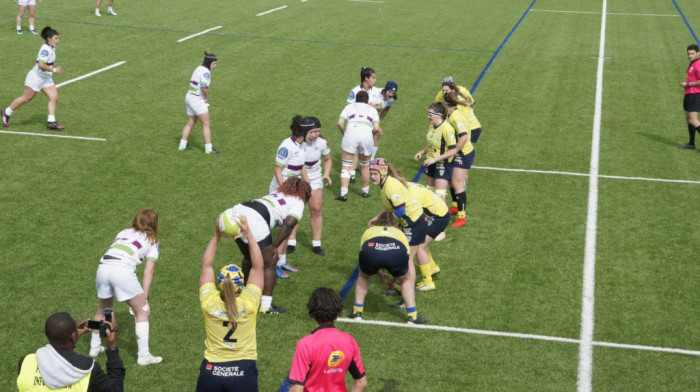 Lineout for Romagnat against Bayonne

The new 16-team structure of the French Elite championship resulted in the first ever Championship quarter-finals last weekend, with the top team in each of the two pools playing fourth in the opposite pool, and second playing third.

Not unexpectedly everything went to form, though not without the odd some missed heartbeats.

Champions Montpellier and Poule A winners were imperious as ever, dismissing the threat of Grenoble - the only team from outside last season’s Top 8 to make the quarters – by 51-7, a scoreline that could have been significantly worse if six out of nine conversions had not been missed.

AS Bayonnaise – runners-up in Poule B - will meet them in the last four, winning reasonably comfortably against Romagnat, having filled the temporary stands erected at the Stade Pierre-Cacareigt.

Romagnat lead with a fourth minute penalty, but after that the home defence was solid, and their forwards took charge. Prop Torha Balde scored their first try after 12 minutes and just before the break the power of the pack ensured a penalty try.

Up 14-3 at half-time, Bayonne resisted a strong comeback from the “Auvergnates”in the second half. Cheered on by travelling support that filled one of the main stands – Romagnat scored after just three minutes to reduce the gap to four points. Torha Balde restored the lead shortly afterwards, but with 18 minutes left Romagnat came back with the try of the game to take the score to 21-15. That, however, remained the final score.

Toulouse’s second club – Blagnac – hosted Bobigny from Paris in the third quarter-final, in the closest game of the four. The lead changed hands repeatedly, Blagnac’s early 6-3 lead after an exchange or penalties being wiped out by a penalty try for Bobigny that gave the visitors a 10-6 lead at half-time. Blagnac scored their first try early in the second half to regain the lead 11-10, only to lose it… and then regain it as penalties were exchanged again midway through the second half.

Two more penalties for the home side took their lead to 20-13 before a late try gave Bobigny the chance to level the score – but the conversion was missed.

Finally Poule B winners Toulouse saw off a strong challenge from Rennes, winning by three tries to one (22-10) to set up a local “derby” semi-final with Blagnac this weekend.