In the first round of return games last weekend, all of the leading teams were drawn against side from the bottom half of the table – but though most results were to form, scores were generally closer than expected. 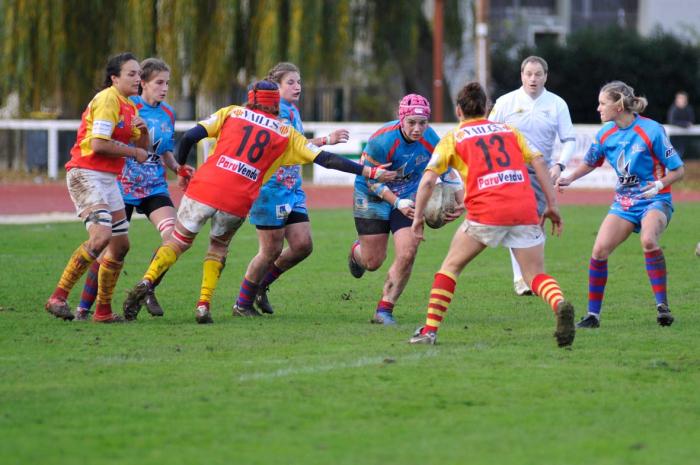 Ninth places Bordeaux in particular put up a mighty fight against leaders Lons on Saturday evening. The first half in particular finished on deadlock – 0-0 after forty minutes as Bordeaux were able to keep possession, with Lons at times disorganised and unable to respond. However some harsh words from the Lons coaching team during the break galvanised the champions and within 8 minutes of the restart it was, almost inevitably, Caroline Ladagnous who broke through to put Lons ahead. Little more than ten minutes later she doubled the lead, and ten minutes from the end Pauline Raymond added a third try – and, after the first-half, an unexpected bonus point. However a win by only 17-0 in a fixture they had won 32-3 in September was unexpected.

Lons predecessors as champions – Perpignan – also struggled unexpectedly against lower ranked opposition. Having won 26-7 at St Orens at the start of the season, a comfortable win on their own ground seemed certain, but in practice St Orens continued with the form they had shown just before Christmas, pushing their Catalan opponents all the way before only succumbing by 10-7, the vital losing bonus pulling them into sixth place overall.

Lille never looked like losing on their trip to Paris to play Bobigny, but despite being on top for most of the game only picked up their vital third try from the final play of the game. A Pertus try after three minutes and another from Cuvillon on 25 had looked like prelude to a large win, but determined defence from les Balbyniennes held them at bay until a second Pertus try on full-time.

Caen, who began the day in second place, had a tricky game away to Rennes – a team racked with injuries before the Christmas break, but now back to full strength. Although unbeaten at home, Caen have struggled away all season, and this weekend was little different. In a scrappy game in a heavy pitch, Caen conceded tries at the near the beginning of both halves and – despite coming back with two tries in the final 20 minutes – were unable to overhaul their hosts, going down by 19-15. The result sees Caen drop to fifth.

The only exception to the pattern was Montpellier, who had no problems disposing of bottom team Sassenage, scoring eight tries in a 48-10 win.

Only one game is listed for next weekend – Lille’s game away to Bordeaux, postponed from October. If Lille win– as they should – they will jump into third place.