It has been a difficult few weeks for French champions Lons. Prior to the Six Nations break they were unbeaten – and, it seemed - unbeatable, but since the return they have lost half the matches they have played and slipped to third in the table. Even their home fortress was breached, after two years of nothing but victories. 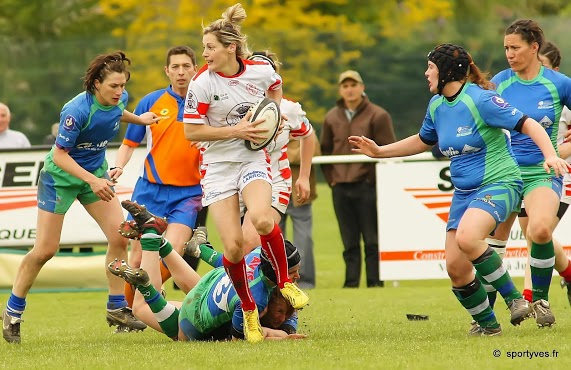 But Sunday may have seen a return to winning ways. Second placed Lille were visitors – another team who had briefly climbed to the top of the table this season before suffering set-backs. As was to be expected from two teams so close to each other in the table, there was little to choose between them – Casenave’s 4th minute try and Grand’s penalty for Lons being balanced by two Lille penalties at half time.  Constant Lons pressure early in the second half extended Lons’ lead, but a try for Pertus pulled Lille back in the game again. In the end, Lons took the honours by 15-11 and therefore became the third team to qualify for the play-offs, where they will almost certainly now meet… Lille.

The current league leaders are Montpellier, who – in marked contrast to Lons – have been in magnificent form since January. The latest victim of this supremely confident team was Rennes, who have had a good season so far, but could do nothing in the face of an eight-try onslaught by the “Ladybirds” as they ran up 50 unanswered points.

The final play-off place has still to be decided, but Caen went a long way to settling the matter with a win at the home of their main rivals, Perpignan.  Wet and windy conditions did nothing to stop a try fest, with the two teams sharing eight tries. Perpignan initially opened up a 20-5 lead, but a penalty try followed by scores from Amandine Vaupre and Julie Duval to give the visitors a 24-20 lead the game neared its end. Perpignan had not given up, however, and appeared to have snatched the games only seconds later with third home try give them a 25-24 lead… only for Virginie Letellier to score Caen’s fifth and final try for a vital 29-25 win. The result opens up a seven point gap with only two rounds of games to go. However, both of Caen’s remaining games are against teams above them, whereas Perpignan must only visit teams at the bottom of the table. It’s not all over yet.

At the bottom the fate of Sassenage was finally decided. The 18th defeat of the season – this time a 28-16 home defeat to St Orens – meant that they are now certain to finish bottom and be relegated. This was made certain when their nearest rivals, Bordeaux, won only their third game of the season against Bobigny, picking up a bonus point in their 29-20 win, and keeping a slim mathematical chance that they might yet avoid having to play-off for their position in the Top 10.