The longest season in women’s rugby has just one more week to go. The French championship’s 42nd final next weekend will be between Montpellier and Lille. 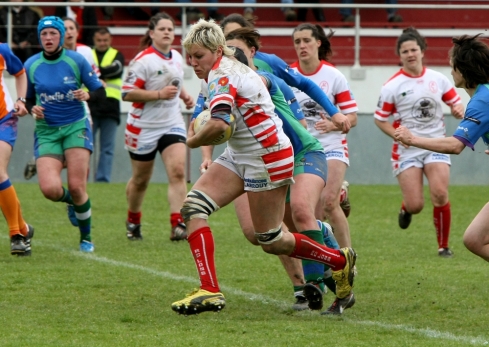 Montpellier finished top of the league in the regular season, and travelled to their semi-final at Vierzon in central France full of confidence, where they were to play Caen. Unbeaten since the beginning of October, Montpellier went top of the table in January and finished ten points clear.

Caen had missed out on the semi-finals last season, but finished fourth this season 14 points clear of Perpignan. However, they had lost both games against Montpellier – albeit narrowly.

Montpellier’s run has coincided with the return to fitness of Aurelie Bailon – one of six internationals in the team – and it was she gave them the early advantage. Caen were 9-3 behind and already chasing the game when, in stoppage before the break, they first conceded a try (from Manon Toupin) and then a fourth penalty, giving Montpellier a 17-3 lead.

Montpellier extended their lead soon after the resumption, after which – despite Caen pulling one try back - the game was safe. Two more tries followed as last year’s runners-up finished winners by 36-10.

The team they lost to in last year’s final – Lons – were up Lille, who had finished runners-up in the league, in Poitiers. One match all in the regular season, a close game was expected and so it proved to be.

Lons are a much more physical side than Lille, but Lille coach Damien Couvreur had prepared for this. His team absorbed everything the Lonsois could throw at them, breaking out where possible.  On 15 minutes Alexandra Pertus put them ahead with a penalty, and five minutes later extended that lead to 10-0 with a converted try. Christelle Chobet pulled a try back just before half time, but Pertus was on hand again soon after the break to add a second penalty and take the score to 13-7.

And so it remained, Lille defending resolutely to the end. It was not a classic game to watch, but a well planned and executed victory – “We did what we had to do”, said Couvreur after the game, “and Lons now know more about how we can play. We never dropped our intensity, in defence or attack and were always in charge, able to change the game at will.”

Saturday’s final – again in Vierzon – will be Lille’s first ever tilt at the championship, whereas for Montpellier it will be their sixth final in seven years (two of which they have won, in 2007 and 2009). The southern team will start as favourites – the game is a repeat of last year’s semi-final, and leagues meetings in the past two years have given Montpellier three wins and a draw.

* Also on Saturday in Limousin Bordeaux will be fighting to retain their Top 10 place with a game against Romagnat, who finished runners-up in the Armelle Auclair second division.