It was back to the serious business of club rugby for France’s international this weekend as the Top 10 nears its climax. Six games over the next seven weekends to decide who will make the play-offs – and, though it is really only five teams still in the running, none can yet be certain of a place. 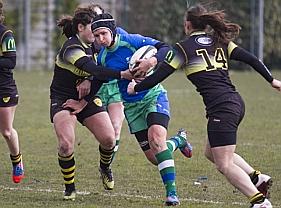 Even so the team best placed for a semi-final tie is the one that had no players in the Six Nations squad (though a few in the Sevens). Lille had been a little concerned after so many weeks off for their squad - "the girls went into the unknown, no one knew how it was going to roll” said captain Laura Di Uzio – but they need not have worried as they laid down their intentions for rest of the season with a massive nine-try win over Stade Bordelais.

The northerners raced into an early lead with a try from Yanna Rivoelen after two minutes, followed another from captain Laura Di Muzio five minutes later. Rivoelen added another before the quarter hour and – aside from one try from Bordeaux – it was then largely one-way traffic. Four more tries were scored before half-time, which came with Lille 45-5 ahead. Changes to the Lille team in the second half slowed the rout and allowed Bordeaux to compete, but the final result was a massive 59-17 win.

Coach Damien Couvreur did not hide his satisfaction "A highly successful start, a first half with all guns blazing and the game was over before the break. We've done what we needed to do”.

However, hard on Lille’s heels come Montpellier, who came through a rather tougher battle at Perpignan. In a game that featured international on both sides, last year’s runners up had to come from 8-5 down at half-time to win. With a good crowd behind them the home side looked dangerous in the backs, but in the end it was the extra weight of the Montpellier pack, with Portairies and Mignon in the front row, that made the difference, greatly aided by the boot of Aurelie Bailon. Gradually Montpellier pulled ahead, and superbly worked final try from Billes for Perpignan was to no avail. Montpellier won 29-20.

With Caen predictably winning 27-6 against bottom club Sassenage, Perpignan now drop out of the top four. With only one home game left - compated to Caen's three - its going to be a tough battle now for Perpignan to make the final four.

Elsewhere champions Lons returned to winning ways, after a difficult start to the year, with a comfortably, but unimpressive, 26-11 win away to Bobigny and hang on to third, and finally in a game between two clubs now safe from relegation, but too far behind to trouble the leading clubs, Rennes defeated St Orens 12-7.