The unthinkable now looks probable. For the first time in a decade Perpignan, champions as recently as 2011, look likely to miss out on the play-offs for the French championship after their second defeat in two weeks. 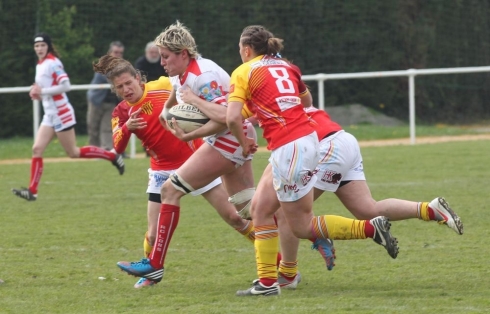 After losing at home to Montpellier last weekend, Perpignan travelled this week to current champions Lons. Games between these two clubs have always been memorable in recent seasons, and this proved no exception.

More than a dozen “Bleus” past and present were involved in the game, and it was one of the youngest of these (Julie Billes for Perpignan) who scored the first try after 26 minutes – a somewhat controversial score, coming from an apparent offside position to score. However, there was nothing wrong with the flying wing’s second try only two minutes later, which gave the visitors a 15-3 lead.

Lons’ pack was proving the stronger, and just before half-time the home side were back in the game when a strong forward move set up a try for Caroline Ladagnous.  With a similar move 15 minutes into the second half allowing Christelle Chobet, the game was tied at 15-15.

The pressure was now all on the visitors, and came down to the final play of the game, and a penalty for Lons which Laetitia Grand converted. The win keeps Lons in third place on 51 points, ten ahead of Perpignan who remain in fifth on 41.

Perpignan’s hopes of making the final four were reduced still more when news came in that fourth placed Caen had won at Bordeaux.  The home team started well, but were unable to convert their early dominance into point. Caen, on the other hand, scored on their first attack – Sandra Rabier picking up from the back of the scrum to drive over.

It was a pattern that continued throughout much of the game, Bordeaux repeatedly getting into good positions only for vital passes to fail to go to hand, or for needless penalties to be given away. Caen, on the other hand – full of confidence – were able to soak up the pressure and capitalise on the opportunities that came their way. The result was a very professional 27-14 win for Caen, who have now opened up a four point gap over Perpignan. With three of their remaining four games at home (where they are unbeaten this season), the chance of a semi-final place for the Normans look good.

The two teams best placed for the semi-finals also came together when leaders Lille travelled to second placed Montpellier – the only side Lille have not beaten since their promotion in 2011. The two teams drew 20-20 in a titanic battle earlier in the season, and for much of the first half it was equally close, with Montpellier only 3-0 ahead at the break thanks to a penalty from Aurelie Bailon, despite the home side’s dominance of possession.

The pressure eventually told at 51 minutes, when Montpellier were awarded a penalty try. A second try in the 75th minute from Audrey Parra confirmed the win – but crucially Lille (with the help of some occasionally poor decision making by Montpellier) were able to stop the home team from taking the bonus point and so, although Montpellier now go top, the gap is only three points.

If relegated, Sassenage’s replacement in the Top 10 looks likely to be La Valette, a club from the suburbs of Toulon, who have dominated the “Armelle Auclair” (the French second division), wrapping up first place with a game in hand following a 60-0 win against Pachys D’Herm. La Valette are interesting as they have followed Lille’s route to the top, having first achieved success in the national club sevens before converting this to fifteens. Jessy Tremouliere’s Romagnat club are also looked well placed for a promotion play-off game with Bordeaux.