Montpellier lifted the Top 10 championship shield for the third time in their history today as the championship staying in the south of France for the 11th year running. 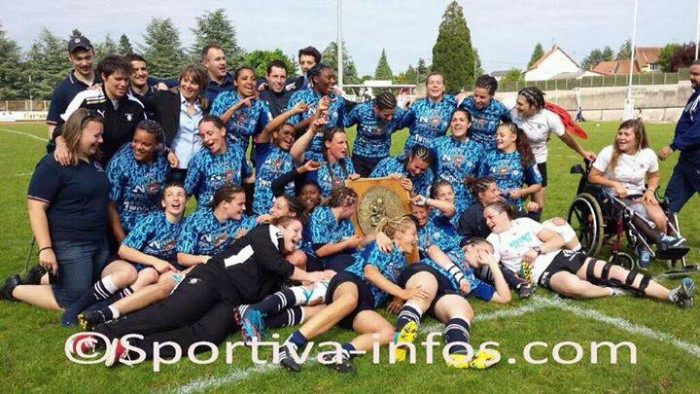 For the first time since 2007 the north of France was represented in the final. Lille MRCV – a second division team only two years ago – were Montpellier’s opponents, but it was the southern side who were clearly favourites, having run away with the league phase.

The game was played this year in Vierzon, a small town in the centre of France which had the benefit of being midway between the two teams, but which was also, as a result, an awfully long way for any supporters to travel. As a result the crowd was well below the 1000 or more experienced in recent years.

The weather was slightly overcast with a threat of rain when Montpellier’s international fly-half Aurelie Bailon – key to their unbeaten run since October – kicked off.

Lille had the best of the opening 10 minutes, with most of the possession but – crucially – unable to break into their opponents 22. Even so they had two chances to go ahead with difficult, but kickable, penalties for Pertus – but both were missed.

Having soaked up the initial pressure, Montpelllier now took the initiative. On 14 minutes it looked like their might have scored the first try, only for the referee to say that Elodie Portaries had not grounded the ball properly. If that was a lucky break for Lille, their luck did not last long. Two minutes later Bailon had her first chance to kick a penalty – and she did not miss.

The pressure was now on Lille. Six minutes later a second penalty was called, against the Lille front-row, and Bailon stepped up to score again.

Montpellier were now in total command, and only desperate defence on the Lille line kept them out. With the referee warning about a penalty try if infringements continued, Bailon saw a chance and kicked ahead – a crowd of Monpellier players chase into the try zone and flatten the ball… but just over the dead ball line.

Another lucky break for Lille – but again not for long. Shannon Izar gives away a penalty for offside, and Bailon is on target again. The score are half-time is 9-0  - but it could have been twice that.

The second half continues in the same manner. Six minutes into the half Bailon kicks her fourth penalty, and then two minutes extends the lead to 15-0 with a drop goal.

The two teams begin now to make use of their benches, and only after this do Lille manage to break into the Montpellier half. Then, with just 17 minutes left, Laura di Muzio for Lille finds a gap, releasing her international sevens team-mate Shannon Izar. Izar sprints for the line, is pulled down just short – but Rivoalent is there to take the pass and score. With Pertus converting suddenly Lille are back in the game. Its 15-7 with 16 minutes left.

Bailon has a chance to end the game with eight minutes left, but misses a difficult kick 30m out - her first miss of the game. But Its Lille who are now driving forward and Soloch scores Lille’s second try from a line-out. Suddenly its 15-12.

It’s a great recovery by the northerners – but it’s too late. The game restarts with less than two minutes on the clock, and as soon as they recover the ball Montpellier kick into the crowd… and celebrate! Champions of France!