French turn on the style at Stade de France

France defeated Canada 22-0 at the Stade de France this weekend having learned plenty of lessons in defeat to the same opposition just a week before. 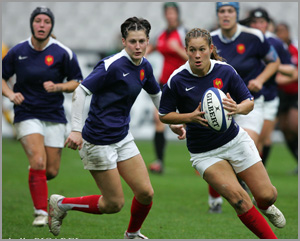 Canada had no choice but to batten down the hatches for the first 40 minutes as the French were relentless in their attack.

A quick try by France put Canada on the back foot, and they never really recovered.

Besides the magnitude and the venue, the match had a different feel to it than Wednesday. France played to the occasion and controlled the game, contesting the ball around the fringes and dominating the point of contact.

Paige Burdett was one of two players to start both tests. The second row said the change of intensity by the French was the difference.

France started a lot quicker than they did on Wednesday. They really challenged us up front and at the breakdowns. I dont think we gave them as much of a challenge at the point of contact. We didnt play our game because we were on defense for most of it.

France did what we wanted to do at the contact area, and around the fringes. They gave their backs the perfect platform to kick and attack from. They sucked our defense in and then played it out wide.

Long said the slow start by the Canadians left them playing catch up.

We just didnt start very well. It was all about our execution. Unfortunately we just didnt click. Once we let in that early try, we were left chasing the game after that.

Though his squad was disappointed with todays result, Long reminded them this was just a step towards 2010.

There were still a lot of positives. Again we need to go away and work on the things that didnt quite come together today, but we knew this was just the first step in preparation for the World Cup. There were some solid individual performances though; Megan [Gibbs], Gillian [Florence] and Kelly [Russell] worked their socks off and Paige [Burdett] impressed again.

Paige did all the groundwork today, especially around the fringes. A lot of the time she stopped Frances forward momentum.

There will be highlights available from both France tests online on December 1. The link will be posted on the Rugby Canada website.

Pictures thanks to: Isabelle Picarel, FFR.