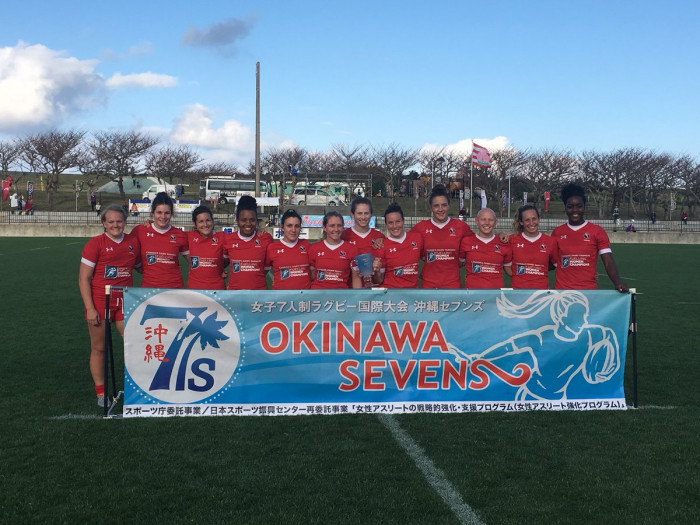 England’s squad was particularly strong, with Amy Wilson Hardy, Sarah McKenna – but appropriately it was Jess Breach who did most to help take her team to the final, where Canada would reverse their opening day defeat to lift the title.

Unsurprisingly the lack of experience among many of the players meant it proved to be at times an unpredictable weekend. No teams completed the pool stage on the first day with 100% records, and England were the day's only unbeaten team. Games were closely fought with leads changing hands repeatedly. The opening game between Russia and Fiji was typical, Russia finally sneaking ahead only in the final minute, only to see Miriama Naiobasali, who had scored the opening try, come back from the bench to score the winner from the final play. USA also came from behind in their first game to beat Japan on the final play with a try from Kelli Smith tying the score before Natalie Kosko converted for the win.

Jess Breach carried on from Sydney with two first-half tries to set-up an England win over Canada, despite a late comeback by the Maple Leafs, while Alysia Lefau-Fakaosilea showed she could be a name to watch for with a first-half hat-trick for the Pearls against Japan B.

Japan A lost from the final play again in the second round against Russia, while the USA won the tournament’s most one-sided game with a 31-0 win over Fiji. In Pool B Canada recorded their first win over Japan B before England met Australia in a classic match, another Breach brace giving England an early 14-7 lead only for Australia to come back through Cassie Staples and Page McGregor to lead 19-14 at halftime. There was no score in the second half until the final minute when a yellow card for Australia’s Georgie Fredrichs gave room for Sarah McKenna to tie the scores. Emily Scott could not convert, so the game ended a 19-19 draw.

The third round finally saw a win for Japan A over Fiji, before Russia beat USA 19-14 to win the pool. England took Pool B with a strong win over Japan B (Breach again opening the scoring) before the opening day ended with another tight game, Kayla Moleschi getting the crucial score to sneak the game 17-14.

On the second day Pool A winners Russia had to come back from behind to beat Japan B, while Canada won a tight, low-scoring game with Japan A. Australia ran away with their game against the USA with three second half tries after leading only 12-10 at the break, while Vicky Fleetwood’s second half double ensured England a place in the semi-finals.

The semi-finals were surprisingly one-sided, with Canada shutting out Russia until the final play, Caroline Crossley’s two tries either side of halftime ending Russian resistance. England conceded and early Page McGregor try to Australia, but after that Matthews, Hunt and inevitably two tries for Breach put them into the final.

The final was dominated by the Maple Leafs, England not getting on the board until the final minute in reply to five Canadian scores shared between five players (Pamphinette Buisa, Caroline Crossley, Kayla Moleschi, Natasha Watcham-Roy and Megan Lukan) demonstrating their strength in depth.