Garcia hoping to go out smiling

The Allianz Premier 15s Final will be the last ever game of rugby for Spanish star Patricia Garcia, who has played club rugby all over the world and who has represented Spain almost 400 times across sevens and 15s. She told us how she's feeling ahead of her last outing, where she could make history by becoming the first player to win the top club league titles in Spain, France and England. 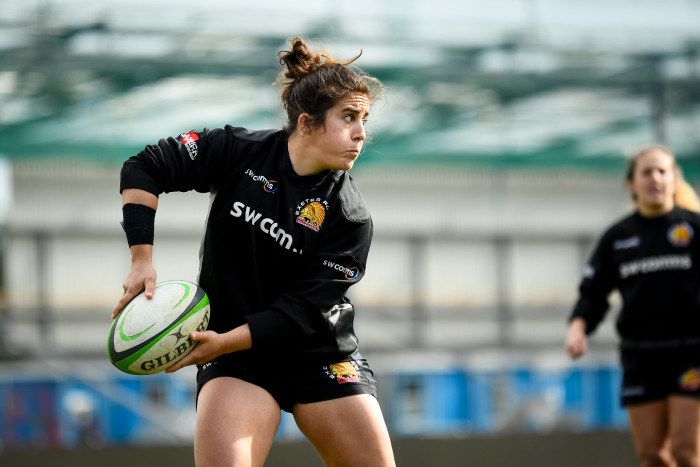 Tell us why you’ve decided to retire.
I have been competing for a long time now as a club player and then with Spain for 12 years. In life my perspective is that you have phases in your life, and I did all I wanted to do in terms of playing with Spain and this weekend I get to go out with a big club final.  With Spain, well in the teams I was in we played in four World Cups – two 15s, and two sevens and in the Olympics and the World Series. I played almost 400 games across both codes for Spain in total and so it felt like it was time to step aside and let others step up, and generally I am ready to do other things in the game.

What are your best memories of playing for Spain?
We have had highs and lows. Mostly I will remember the people I played with – they became my family and I have a lot of close friends that I will have for life. Qualification for Rio was historic for Spanish rugby and was a really big moment. Also, I remember with a lot of fondness, the time we beat New Zealand in sevens in London. At the World Cups we have done well – in sevens we finished fourth and fifth and so I take incredible memories from international rugby with me.  The people I learned from and shared the experience with around the world are the most valuable things rugby has given me.

How have you enjoyed your time at Exeter?
I have loved it. It’s a great club and they’ve embraced the women’s programme and we are growing on and off the field. Helping within the academy and within the community for me personally has been exciting and I have loved that. I have tried to help create new pathways so girls can arrive and there is a future for them in high level rugby, and then on the field we are trying to inspire people down here to want to play the game. It’s such a professional league – it’s been great to play in it.

You have played at the top level in England, France and New Zealand - how do they compare?
They are all very different in terms of style of play and culture but I love to learn from others so I enjoyed it all. In Zealand, I played provincial rugby with Waikato and they played a style more with my natural instincts coming from a lot of sevens, the ball was alive more for example, but then here in England I have really enjoyed different tactics and systems I've worked on, especially in attack. To play in this league, and train most of the days of the week in a professional set up has been game changing. In France there’s a lot of ball in movement and continuity so that was fun too! The two seasons I had down there were brilliant with Lons and Bordeaux, and we won the French Championship there too. They have all been incredible experiences.

How are you feeling about the final against Saracens?
I am very excited for this big final. It is an honor to wear the shirt and make history for the club, but it will also be very emotional for me to finish my rugby career. I can’t wait to make the most of it.

What is the future direction for Spanish rugby? Can it continue to try and balance with sevens and 15s?
This is a tough question because at the moment that is proving very difficult. It’s the first time in a long time we haven’t qualified for the World Cup and we also didn’t qualify for Tokyo. We need to rethink, and revaluate where we have been, where we are now and where we want to go.  It is someway normal – these are the questions you have to ask after every cycle. We had achieved our goals before and right now we are not so we have to make some strategic changes. We have a new Director of Rugby now that has recently arrived so I hope he can make a real difference.

What would you like to see happen in Spain?
We have to continue working towards professionalism and push and accelerate that.  Yes, our sevens players have contracts and sometimes 15s players in World Cup years have support, but that is all evolving and developing and we must keep working towards that in a bigger way. At some point we have to say we are not comfortable where we are and we need to move forward and be ambitious.

What next off the field - are you interested in staying involved in rugby in other ways?
Rugby is a game I love and I hope I can keep involved in it and return and give back to it in the way it has given to me. I have coaching qualifications and I want to keep doing that. I love to help develop other players and I also have a charity and we run projects all around the world. I am open minded to other opportunities, but once the game is over this weekend I will rest!

If you were put in charge of World Rugby, or women's rugby at WR, what would you do?
Hard question! One thing I would say is generally our game must dream big. We recently had a lot of sell-outs and big crowds in the Six Nations, in Spain we’ve seen Barcelona pull in incredible crowds in women’s football so I think with those examples, if I was in charge, I would be dreaming really big for our sport. Dream big, then work and fight for it.