GB squad get chance to gel

Players from England, Wales and Scotland will come together to form a Great British Women’s Sevens squad for two invitational tournaments as part of preparations for the Rio 2016 Olympic Games starting this weekend. 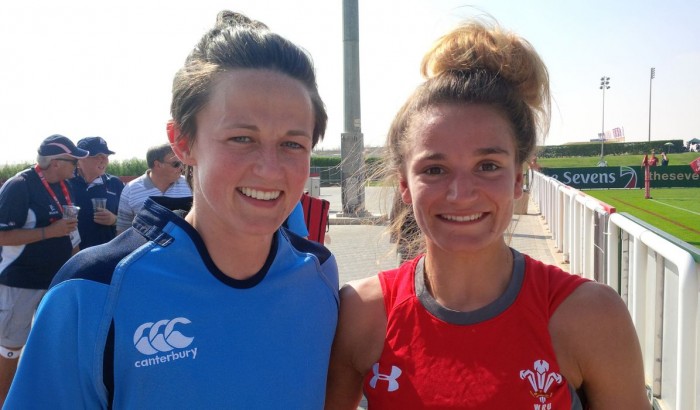 A squad of 12 players have travelled to Vegas for the USA Sevens Invitational Tournament, which takes place 3-5 March, and then travel on to Canada for the Vancouver Rugby Festival, taking place 10-11 March.

Laurie Harries and Jasmine Joyce from Wales (pictured) and Stephanie Johnston from Scotland, who all joined England's squad of 19 full-time professionals at the end of last year, will join nine England team mates for the tournaments.

Harries, 26, has become an integral member of the Wales women's programme at both sevens and 15-a-side, while Joyce burst on to the sevens scene as a teenager on the wing in Dubai in 2014. Both players then went on to enhance their growing reputations when Wales claimed seventh spot in the Women's Sevens World Series qualifiers in Dublin last August. Johnston was also a well established player on the Scottish XV team before joining up with the GB squad last year.

Head Coach Simon Middleton said: “These competitions are an integral part of our prep for Rio and give us the chance to see the GB squad in action again, building on from the January training tournament in Souston when the playing combinations started to develop well.

“It is also another opportunity for individuals to stake their claim and earn a place within the Olympic squad. It is great to be able to bring a GB squad together in a competitive environment.”

Middleton added that he is looking to use the tournament to develop player experience within a major tournament setting after England disappointed with seventh place in the recent Sao Paulo leg of the HSBC World Rugby Women’s Sevens Series.

He said: “In terms of expectations we are again focusing on performance rather than outcomes. We want to see clear development in the cohesion of the squad and also the individual performance levels rising. Playing in front of the big crowds in the stadium in Las Vegas will be another learning experience for the players.”