Germany have won the first leg of the European Trophy and look well placed to bounce straight back into the Grand Prix. Who will join them is less clear. 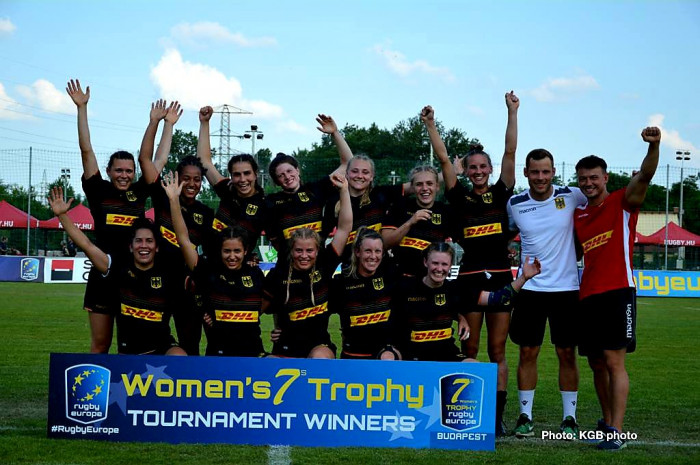 Germany dominated the first leg of the European Trophy in Budapest.

The leading teams on the first day were, unsurprisingly, the top seeds with Germany, Portugal and Sweden all topping their pools by some margin. However, there were surprise performances aplenty.

The most noteworthy was that of Turkey, who made their sevens debut in 2013 and were promoted to the Trophy for the first-time last year, reached the quarter-finals at their first attempt thanks to a dramatic final-play win over Switzerland. Georgia – promoted with Turkey – just failed to match Turkey’s performance when they missed out on the last eight as the unlucky third placed team.

On day two, after Germany had swept past Turkey, the remaining three quarter-finals were close affairs with some surprise results. Romania had crept into the quarter-finals as a best third place team, so their 14-7 win over Portugal was a real surprise, and Czechia continued their form from the opening day with an impressive win over Sweden. Norway also pushed Finland all the way before going down 17-10.

The semi-finals saw Germany brush aside Finland, but the match between the two surprise teams from the quarters was far closer, Romania just edging it 12-7.Germany won the final, and Czechia completed their impressive weekend with a 25-0 win over Finland to finish third.

Germany end strong favourites to win promotion back to the Grand Prix, but based on this weekend's performances who will join them seems wide open.

Israel have stage great escapes from relegation almost every year, but after finishing winless on Budapest they now face a tougher challenge than ever before. Switzerland are also facing the drop having finished 11th - they will need a much improved performance in Lisbon in three weeks time.