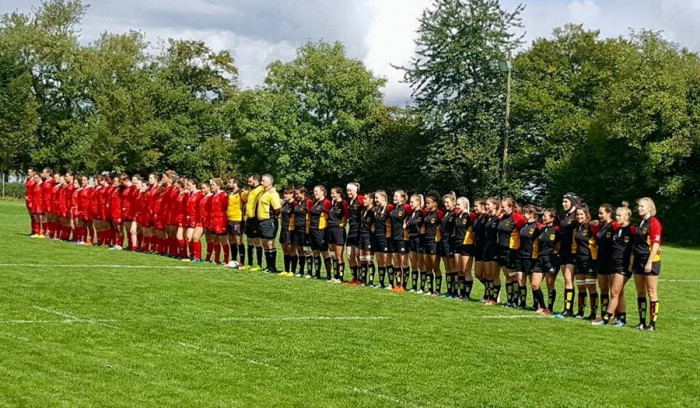 Report from Sussierugby,com, Konstanz, 10.09.2017 - The Swiss Women's XVs National team (World Rugby Ranking 37) took on Germany (ranked 20th) in a Test Match to kick off the new XVs Women's Test Match season, after a one-day training camp on the day before.

On a beautiful day on on the shores of Lake Konstanz, a scenic body of water spanning Switzerland and Germany, the two countries' National Women's sides met in their annual summer fixture for the 3rd time in as many years.

Both teams started off tentatively, exchanging ball possession and attacking opportunities in the first quarter of the encounter. It was the Germans who were able to capitalize first, with center Steffi Gruber touching down for the first try of the match after 24 minutes of scoreless play. The Germans, encouraged by their first notches on the scoreboard, managed to get over the line two more times in the opening half, with the teams heqding for the sheds at a halftime score of 0-17.

In the second half, Switzerland was able to make some readjustments and to ward off German pressure, while creating a few good scoring opportunities themselves. Unable to capitalize on any of them, it was Germany who got on the scoreboard again in the 60th minute, with Number 8 Eilisa Trick touching down for a try, making the score 0-22. WHile it was again Switzerland who then dominated ball possession in the last quarter of the enoucnter, they were once again unable to transform any scoring opportunity into points. Finally, it was Germany again who had the last word, with Captain Friedericke Kempter dashing in from the 22 for a try, converted by winger Julia Braun. Final score: 0-29 to Germany.

For Switzerland, this was the start of a new cycle under new head coach Emanuel Revert, with many new young players joining the squad for the first time. This is the start of a 13-month preparation culminating in the Rugby Europe Women's Trophy, to be played in October 2018.