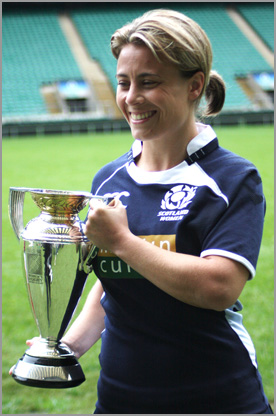 Drawn in the same pool as France, Sweden and Canada, there will be no easy games for Scotland at the 2010 Womens Rugby World Cup.

Like Sweden, Scotland qualified for the competition through the European Trophy competition over the summer and they will take on more fancied France and Canada sides though she is confident ahead of the start of the season.

Over the next nine months Scotland will be training and preparing to play well; to play the fastest and most physical rugby we can in the World Cup. Its as simple as that. We approach every game looking to win it.

With a new coach on board in recent months she said there is a good mood in the Scotland camp.

Things are very well within the Scotland camp, its an exciting time for us, we've just appointed a new head coach and a new coaching team and preparations for the tournament in nine months are going well. I think we've been very happy with the way we've pulled together as a squad. We are very excited to be working with Gary Parker and Jared Tuoro. Gary's an exceptionally experienced coach and I think there is a real buzz around the camp. The transition has been smooth.

The coming Six Nations will prove hugely important to Ireland, England, Scotland, Wales and France as it will be final major tournament ahead of the World Cup.

Its certainly a big Six Nations before the World Cup. Everyone wants to make a statement about the standard they are playing. We also have a training game against Ireland in December, which will be a really good opportunity for both nations to look at combinations and playing positions and tactics we want to use before the Six Nations. Weve got France as our first game, who we also meet in England in 2010, so that will be a big match, but the tournament as a whole will be great preparation for a tough World Cup.

Despite the World Cup being held away in England she is also hopeful of some support from Scotland fans.

Everyone wants to play in front of their fans; everyone enjoys playing in front of friends and family. The World Cup isnt at a home venue, but its close by. I think it will raise the profile of the game in Scotland with it being so close by and hopefully encourage people to come and support. For all the Home Nations, its something to look forward to.

For more images of the Womens Rugby World Cup Launch check out our Flickr page here.