What a women's rugby game we have in store this weekend in London. 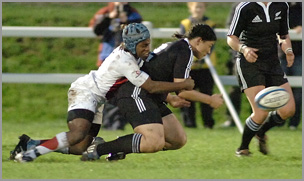 With the Black Ferns looking for their third win in a week, following victory already over England and England A, the home nation will be desperate for a victory on the Twickenham turf.

The emphatic mid-week win for the Black Ferns over England A has led some people to conclude that the game is New Zealands to lose this weekend, and while I was hugely impressed with the victors on Tuesday night in Esher, I would disagree that the result is a foregone conclusion. Lets not forget that while that was very much a second string England side a number of the New Zealand players who featured will turn out again this weekend at Twickenham.

Setting aside Tuesday night, Englands loss by 10 points last weekend came in poor conditions with the normally reliable Katy McLean missing a number of shots at goal which would have made it a different game in the closing plays.

I dont believe that a 10 point loss displayed as big a gulf between the two nations as some believe after all had just one of those penalties hit the target, the game would have taken on a far different shape in the final quarter as England would have been chasing by just a score.

The mid-week game served to highlight that New Zealand have currently got greater depth than England. That in itself must be disappointing to England management given that unlike their opponents, there has been a development process for these players in recent seasons with the World Cup in mind, and there have been regular games at A level throughout the Six Nations this year.

What has been most impressive about the Black Ferns has not just been a ruthless defence they have conceded just 6 points in two games but their attacking patterns which are designed to punch short and close to the breakdowns and then move it fast and wide using clever decoy runners and cut out passes which bring their speedsters into the game quickly. A simple plan but when the Black Ferns punched hard out wide this week, Englands A players could find little solution to dealing with them with their defence left confused and ineffective.

The Kiwis have also displayed an admirable level of all round skill this week with none of their players afraid to ship 20 yard passes and than in itself has been refreshing to watch.

England will know theyve got to get their defence water-tight. They cannot afford to let the Kiwis play their offloading game and bring their danger runners the likes of Renne Wickliffe, Amiria Rule and Carla Hohepa - into the game at speed.

But England are not reigning Six Nations and Nations Cup champions by chance.

The last time England lost a major game against Wales earlier this year they came back with much improved performances against France and Scotland. No doubt they will have analysed what went wrong last weekend and will have been working hard to put it right.

Gary Street has chosen to use regular centre Emily Scarratt at fullback an interesting change as shes played the majority of her games in the middle of Englands backline so how she fares will be worth watching.

Other battles worth keeping an eye on will be between the two sides backrows. England have kept faith with their trio of Maggie Alphonsi, Katherine Spencer and Heather Fisher and those three will play a vital role in slowing the game down and halting the influence of their opposite numbers watch out for Kiwi number 8 Linda Itunu who had a super game on Tuesday night.

Elsewhere Rachel Burford and Claire Allen, two experienced players at this level, will have to curtail the centre Renee Wickliffe, who normally plys her trade on the wing, but who has fantastic feed and electric pace and who will be a danger on attack.

At fullback Amiria Rule has been impressive this week in different positions. She scored the only try of the game last weekend with a strong run and on Tuesday night she set up two tries for her outside backs.

Many years ago I played a season in Christchurch on the same team as Amiria so I know first hand how hard she is to tackle! If England kick poorly she will punish them on the counter.

*Canada are also playing France this weekend at the Stade de France well have all the reaction and pictures from that game over the weekend.