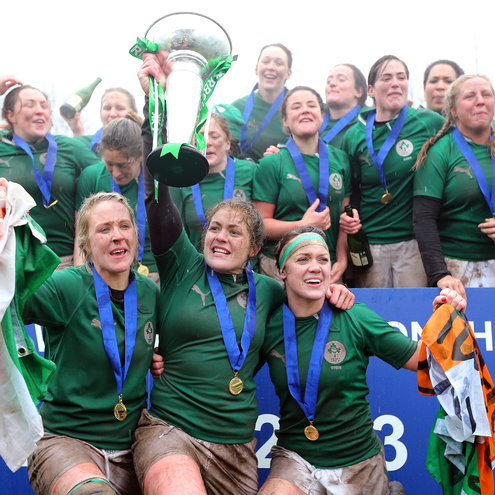 In wretched weather conditions, two penalties from full-back Niamh Briggs guided the girls in green to their fifth win of the 2013 Six Nations - but they had to show tremendous discipline and grit in defence in the closing stages as Italy, gunning for an historic third victory of the Championship, threw everything at them.

In the end, Ireland's impressive defensive record stood to them - they had only conceded two tries and 23 points in their previous four games - as they completed a memorable clean sweep.

Italy gained an early lead in rainy Parabiago through Veronica Schiavon's third-minute penalty, but Briggs answered back for Ireland ten minutes later. It remained 3-3 up to half-time with Briggs, who went closest to scoring the game's only try, missing an injury-time penalty. Marie Louise Reilly marshalled a very effective lineout, from which the Italians struggled to contain the Irish maul at times and the visitors' lion's share of territory should have seen them ahead by the break, but repeated ruck infringements led to Italy prop Lucia Gai earning a yellow card and Briggs split the posts with a 51st minute penalty.

The remaining half-hour was full of tension as defences continued to dominate and the errors increased in the worsening conditions. Front row replacements Stacey-Lea Kennedy and Lauren Day made key contributions in defence as Ireland held out in a torrid finish, ensuring that Schiavon was not afforded an opportunity to kick for a draw.

Grace Davitt, who came in for the injured Jenny Murphy, was harshly penalised for not rolling away in the opening minutes and out-half Schiavon thumped over the resulting kick for a 3-0 buffer.

Ireland attacked with vigour from a scrum in the Italian 22, Joy Neville, captain Fiona Coghlan and Ailis Egan all carrying strongly on the muddy surface. The returning Niamh Kavanagh was heavily involved as the Irish maintained a high tempo, a purposeful maul piloted by the outstanding Claire Molloy getting them into scoring range. Italy's Gai came in at the side of a ruck outside the 22, allowing Briggs to boot Philip Doyle's side level in the 13th minute.

Italy threatened through the fast-breaking Maria Diletta Veronese four minutes later, but Alison Miller got back to make the tackle and Briggs forced a penalty at the ruck.

Ireland created their first try-scoring opportunity 20 minutes in. They moved the ball wide through the lively Lynne Cantwell, and Briggs was unfortunate to knock on over the try-line after a well-placed kick forward from Kavanagh.

As the conditions worsened, the Italians continued to disrupt at the breakdown and a couple of lineout errors ruined promising positions for the Irish. With Cantwell and Briggs probing in the backs and Molloy, Neville and Siobhan Fleming getting through a huge amount of work up front, Ireland continued to press for a breakthrough try.

Centre Cantwell wriggled her way through on a muscular midfield run, providing the impetus for a late Briggs penalty attempt that went narrowly wide of the posts.

The rain fell heavier for the start of the second half, Ireland resuming on the attack amid a scrappy spell of play. They turned down a couple of kickable penalties, the second coming after Gai was sent to the sin-bin.

Italy dug in to hold off a Sophie Spence-inspired series of pick and goes from Ireland, although they could do nothing about a well-struck penalty from Briggs. Her three-pointer put Ireland ahead for the first time, however they failed to make further headway while Gai was off as the conditions played their part in a high error count.

Schiavon was short with a penalty attempt entering the final quarter, the tension increasing as Ireland failed to profit from a fine counter-attacking surge from Miller.

Intelligent kicking from number 10 Nora Stapleton and plenty of grunt from the forwards - the choke tackle rewarded them on two separate occasions, and replacement prop Day popped up with a rallying turnover - kept Ireland in the Italian half.

Italy mounted a late charge, their forwards driving up into the 22, before number 8 Neville competed at a ruck and won a vital penalty. Two final clearances to touch from Briggs and hard-working scrum-half Larissa Muldoon lifted the siege, much to the delight of the enthusiastic and vocal Irish support.

It was a serious dog-fight and far from pretty, but St. Patrick's Day 2013 will certainly live long in the memories of Coghlan and her all-conquering team-mates.